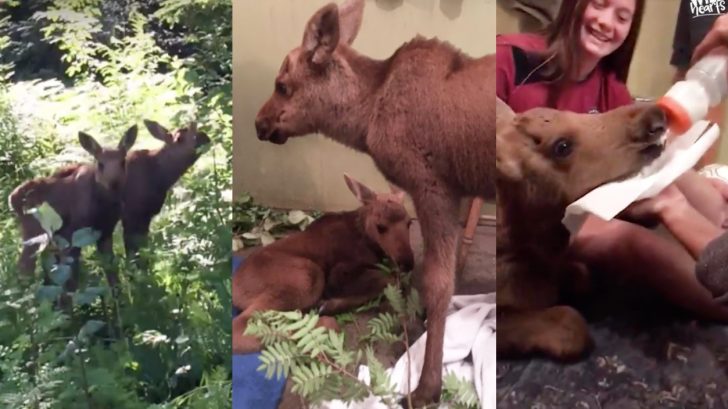 A girl and her sibling from British Columbia, Canada were on the school bus one morning when the bus driver stopped after spotting a couple of baby moose. He yelled to the kids to look at them.

It got much more interesting too, because the moose, surprisingly, kept showing up each day throughout the week for them to look at. They soon learned the reason why they kept seeing them was because their mother had died after she was hit by a car.

The girl told her mom and they decided to go rescue the moose themselves. They called a conservation officer who tried to locate a sanctuary for the two baby moose but wasn’t able to find a spot. He then asked the girls if they could watch over them for a couple of days until he could find a place for them.

The excitedly agreed to do it and said the next week with them was the most fun and incredible experience. They got directions on how to provide for the malnourished babies and fed them, rubbed them, and relaxed with them before going to bed together.

The next day, the girls let the babies out into the backyard and they went from being shy and tired to curious and playful. After a week, the conservation officer finally called back and said they had a sanctuary for them and was on their way to pick them up.

The daughter said she cried when they had to leave but said it was good to know they were going to go on and live in the woods like they were supposed to do. She said later on she received Zoom updates and it looked like they were doing really well.