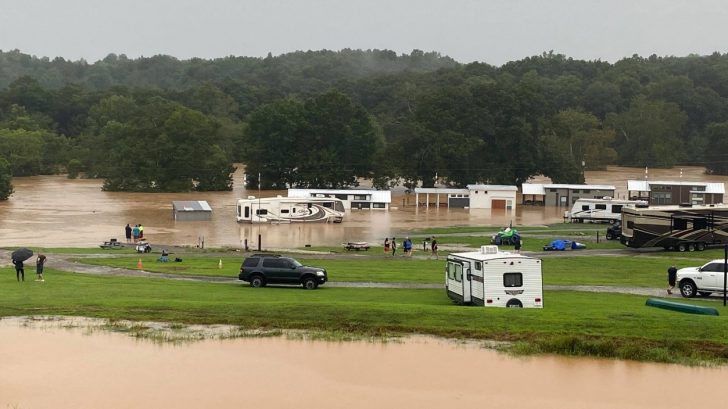 Jared Jakalski was camping with his family in an RV park in Bon Aqua, Tennessee when they were almost swept away, along with their RV, by floodwaters taking over their campground.

The Mt. Juliet family said they often go camping at the Piney River Resort in Hickman County and normally have a wonderfully pleasant time.

“I have two teenage boys that both invited two friends a piece. We let them do this every year. It’s just a big family friend campout where we enjoy kayaking and being outdoors,” Jakalski said, accroding to WATE.

They said they got to the campground on Sunday and set up everything and laid down to sleep for the night. The family got a few hours of sleep in but at 6:15am their phones started ringing off the hook about a flash flood coming and woke them up.

“I looked out the window of the RV and there was a couple of inches of water where we were camped out. Within minutes, that couple of inches turned into a couple of feet. We collected our boys, our dogs. We had three dogs, six boys and two adults with us,” Jakalski said.

He took the family and got everyone to link arms as they walked waist-deep in water.

“There was no time to think. We just came together, and I am responsible for four other children that are not ours. That was my biggest priority, get everyone safe to high ground,” Jakalski said.

After getting to higher ground and away from the floodwaters, Jakalski said he turned around to go back for the RV but mother nature had other plans.

“It was too late. The hitch was submerged under water. We watched it rise very rapidly as we were watching our camper flood out and start to float away. We heard another family in distress trying to exit the camp ground who got stuck,” Jakalski explained.

He said there was a couple who were with their parents that needed help and he and a group of folks worked together to help rescue the woman stuck in a tree, as well as the others.

“We linked up in chest-high water and trudged over to rescue the woman in the tree. We got her back to shore. We proceeded to try and rescue her parents stranded on top of their vehicle. There was no time to think about anything. In desperation, the couple had two dogs and threw their dogs in a cooler and latched onto that and started swimming,” Jakalski explained.

More On The Flooded RV Camp Below