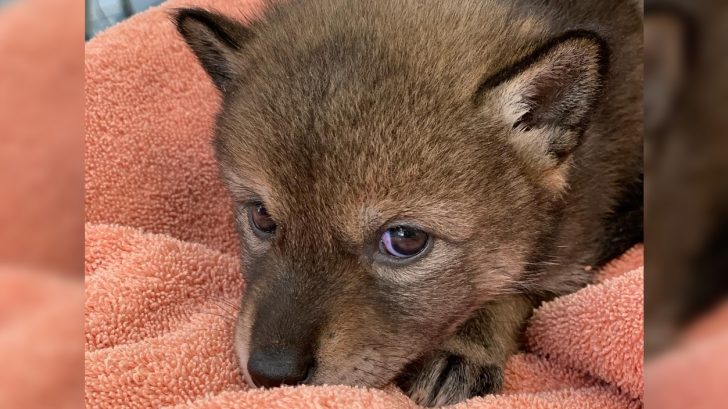 The Cape Wildlife Center shared a post on Facebook showing an Eastern coyote pup that was picked up off the side of the road after being mistaken for a lost puppy.

The center reported that the coyote was found wandering and in distress by a local family who scooped him up because they were concerned for his well-being and brought him home with them.

It wasn’t until later that the family realized they actually didn’t have a dog, but a wild animal instead, and called the Cape Wildlife Center for help.

“After realizing their mix up they called us for assistance. With the help of the Mass Department of Public Health we were able to determine there was no potential exposure risk to rabies, and were able to clear him for care and granted permission to rehab by Mass Wildlife,” Cape Wildlife Center wrote on Facebook

After running tests on the coyote, he tested negative for rabies and is currently recovering in a comfortable isolation ward by the Cape Wildlife staff.

“It could have easily gone differently. Coyotes are considered a Rabies vector species in MA and are susceptible to contracting the virus that is deadly to all mammals including people. If the finders had been bitten, scratched, or had extended contact we would have been mandated to euthanize the pup and test for rabies,” the center said.

Followers of the Cape Wildlife Center Facebook page asked questions about why was still a mandate in the year 2022.

Authorities said the coyote will be introduced to a foster sibling from the Wildlife Clinic of Rhode Island after both pups receive their vaccinations.

They will be raised together in a large outdoor area so they can learn and grow properly into their natural behaviors.

“We work hard to give them as much of a natural upbringing as possible, and will work to replicate the essential behaviors and skills they learn from mom and dad,” Cape Wildlife Center wrote on Facebook.

Once old enough, they will be released back into the wild.

In the meantime, the center said they will keep the public updated on the coyote’s progress via Facebook and share some photos of their introduction when it happens.