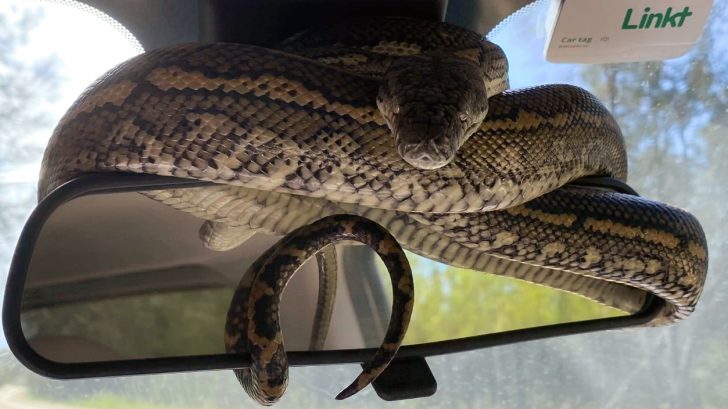 A family from Queensland, Australia were a bit spooked on Sunday after finding a snake had slithered into their car and was curled up around the rearview mirror.

The incident took place north of Brisbane while the family had parked their car to go enjoy a picnic in the good weather. The family said they left the window cracked because it was a little warm outside and wanted to keep the car cool for when they returned.

They soon learned a valuable lesson that day and quickly contacted Josh Castle from North Brisbane Snake Catcher who sent one of his staff members out to the location to remove it.

Josh said it was a very unusual place to find a snake.

“I’ve never seen it,” he told 7NEWS.“I have pulled them out of car bonnets and stuff like that, which is more to be expected because they can get into a bonnet from underneath. The fact it was actually in the car and soaking in the sun through the window on the mirror is quite weird.”

North Brisbane Snake Catcher’s identified the snake as a coastal carpet python that measured out to be four-foot-two-inches.

A few photos were taken and shared on the North Brisbane Snake Catcher‘s official Facebook page where commenters gave their thoughts on the situation.

“Objects in the rear view mirror may be closer than they appear,” one person wrote.

“Sell the damn car, it belongs to the snake now,” another said.

Watch footage of another huge male coastal carpet python in the video below.