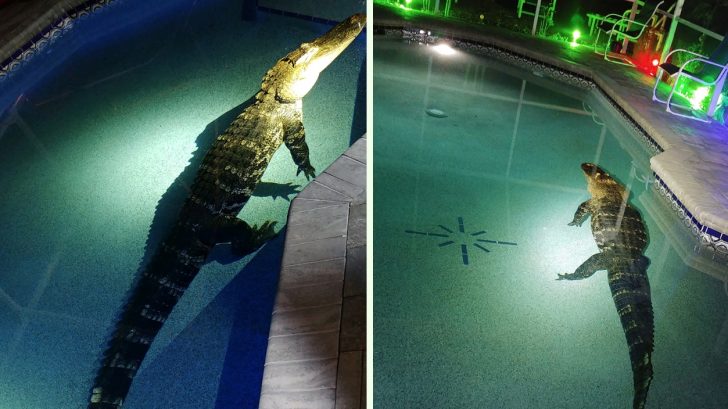 According to the Charlotte County Sheriff’s Office, an 11-foot, 550-pound alligator in Deep Creek, Flordia was found on Tuesday morning (May 17) in a swimming pool of a family’s backyard.

The family said they found the gator after being awakened by loud noises outside around 1:30am and when they went to the backyard to find out what was going on, they were shocked!

They first noticed a big hole torn through one of the screens that surround the pool, which was normally successful at keeping animals and insects out.

They followed the hole to the pool and discovered the massive reptile lurking under the water at the deep end of the pool. Frightened, the family immediately called the Charlotte County Sheriff’s Office to come help them handle the scary situation.

The Sheriff’s Office wrote on Facebook, “Always check your pool before diving in! A Deep Creek family was awakened by some loud noises on their lanai and came out to find this guy taking a dip in their pool. Coming in at 10’11” and weighing over 550lbs., he tore through the screen to get to the nice, cool water.”

The office, along with the Florida Fish and Wildlife Conservation Commission, showed up to the scene, took a few photos of the gator in the pool, and then took a couple more photos of the removal process.

Wildlife officers say that this is not the first time something like this has happened in the local area. A family in the neighborhood was also awakened by an alligator, but this one was laying at their front door.

The Florida Fish and Wildlife Conservation Commission and the Charlotte County Sheriff’s Office said construction has been going on recently, causing the alligators to have less room to roam like they normally do, which is most likely the cause of them venturing into residential areas.