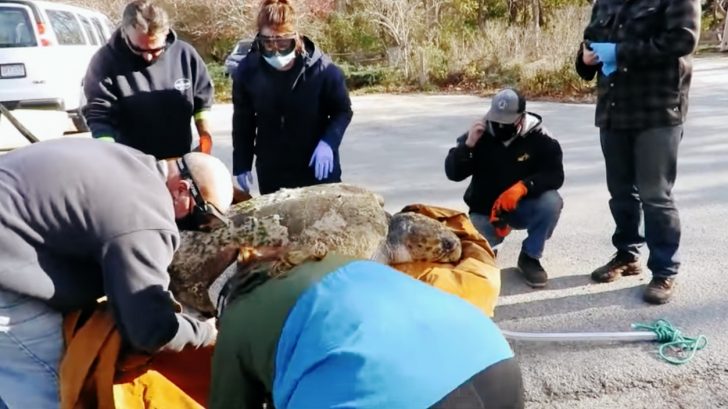 The turtle beached itself and was struggling to breathe, according to officials. When it was first approached, they thought it was dead until it started moving one of its flippers.

Members of the Truro Department of Public Works and the Mass Audubon WellFleet Bay Wildlife Sanctuary worked together to safely transport the male loggerhead turtle to the New England Aquarium.

Vets and biologists gave him medication to replace fluids he was lacking which helped stabilize the turtle. Marine Animal Rescue Department Manager, Connie Merigo, says the turtle has several health problems and is at least 30 years old. It was “extremely rare” to see a loggerhead turtle in Massachusetts.

“A big sea turtle save on the beaches of Truro this afternoon! Thanks to the Truro DPW for loading this very large adult male loggerhead into their truck and bringing it to the sanctuary,” Mass Audubon Wellfleet Bay Wildlife Sanctuary reported.

Watch The Turtle Rescue Video Below