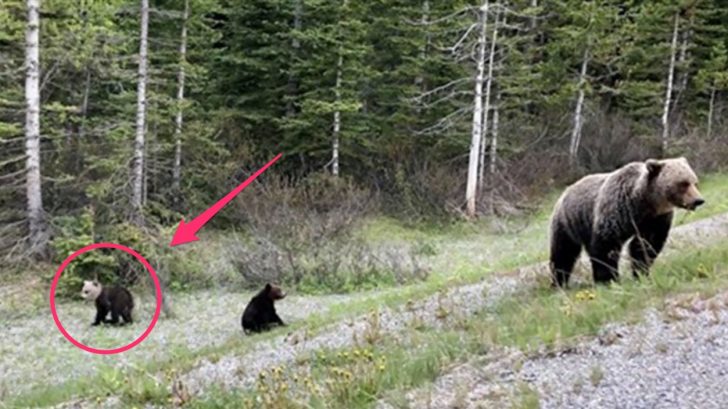 A family driving home from a trip to the Banff National Park in Alberta, Canada, captured a unique image of a white-headed bear cub. The cub was verified by excited experts to be a grizzly bear and possibly the first ever recorded to have a completely white head with regular brown coloring on its body.

The little cub with the white head was likely caused by an atypical recessive gene that would have to be present in both parents to show up in a cub. Scientists believe that the cub might be the offspring of an all-white grizzly that was discovered not too far from where the cub was spotted. That other completely white grizzly bear, known as Nakota by locals, has also made headlines recently and has attracted many visitors to the park.

According to an interview with the Global News, wildlife expert and zoologist Paul Pauquet said,

“[This is] possibly never previously observed and recorded. I have seen and photographed grizzly bears with light blonde (but not white) heads and darker colored bodies. Of course, this new sighting is of increased interest given recent sightings of a white grizzly bear in Banff. The obvious question is whether these two bears are related.”

Pauquet also added that he wonders if the white coloring that has shown up in these two Banff-area grizzlys now means the bears in that area are becoming more isolated from other populations.

A grizzly bear with white fur? They're almost unheard of, and experts hope you never see it. Here's why: https://t.co/N3iCU3yMps

Another wildlife expert by the name of Jeff Gailus also added,

“Unless it (the cub) got into a can of white paint, it’s obviously a very rare color phase, perhaps even rarer than the all-white grizzly present in Banff. To have two such sightings in the same spring is nothing short of a miracle.”

Watch the video below to see to rare white grizzly that is suspected to be one of the cubs parents.