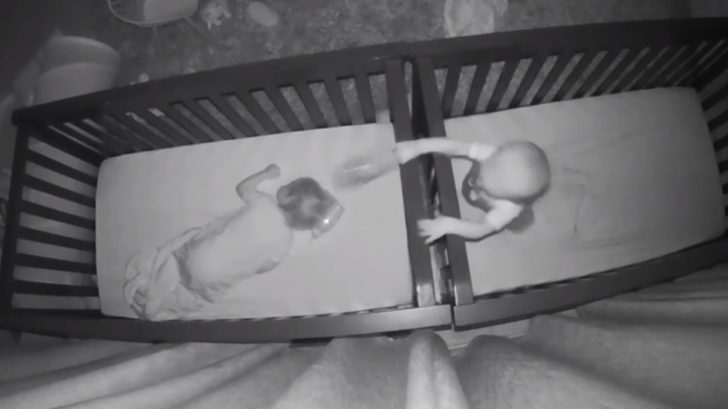 People are jokingly calling 42-year-old Cami Boehme’s 18-month-old son the “evil twin” after he was spotted waking up in the middle of the night to throw his bottle at his twin sister.

The footage showed baby Jack and Ivy sleeping in their adjacent cribs when Jack woke up from his sleep. He rolled over and stood up in the middle of his crib with his bottle in hand and walked over to his sister’s crib.

According to iHeart, Cami said,“We watch the monitor pretty closely. I was checking it because I could hear noises from their room. I knew they were waking up, but they weren’t awake to the extent that we needed to go get them.”

When Jack gets his hand to the railing of the crib he tosses his bottle over into his sister’s crib and it hits her on the head. She wakes up from her peaceful slumber and puts her hand over her head and kicks her feet.

Ivy sits up and looks over at her brother’s crib as if she’s confused about what happened while Jack quickly lays back down and pretends he was sleeping the whole time.

Cami said, “The thing is, they’re actually really sweet to each other and they have a special bond. A lot of the time, they’ll just wake up and sit and play in their cribs. I honestly have no idea what Jack was thinking. I think he might have been trying to wake her up and the bottle just hit her head.”

Cami and her husband were in the living room watching the monitor closely and saw the entire scene go down. They were certainly surprised to witness it.

“When we saw it happen live, my husband and I were like ‘Did he just do that?!’ The funny thing is it looks like such a hard throw. You just imagine the aftermath will be terrible. But Ivy just sat up a little bit and whined a little bit. She didn’t really cry, she just looked dazed and confused thinking ‘What happened?’ She didn’t seem too fazed. It was the funniest thing.”

Watch Footage Of The Babies Below