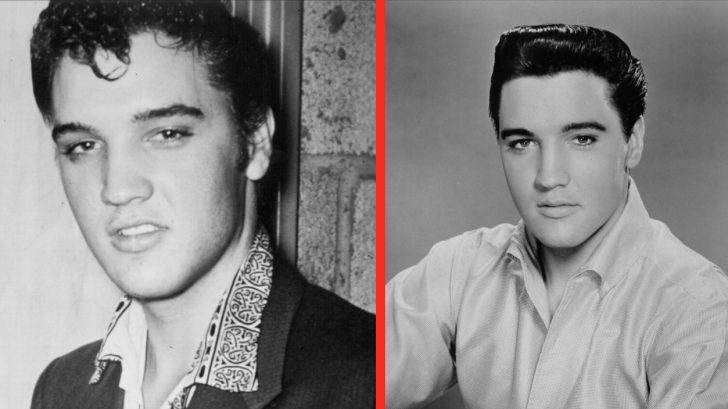 Even now, millions of people have never known the secret Elvis Presley carried with him every single day of his life…and to many, it shocks them to find out -others, quite frankly, just refuse to believe it.

From his very humble beginnings, the future King of Rock and Roll was different. Firstly, he was born an identical twin. Tragically, his twin brother was stillborn, but this just goes to show how Elvis started off life on a different foot than 98% of the world.

Since his teenage years and beyond, Elvis Presley had a noticeable charm with the ladies. It’s often been said of him that he could seduce any woman just by looking into her eyes – and, while a bit exaggerated, the emphasis of his charming persona, ice-blue eyes, and jet black hair all helped him to make quick friends with most women.

Unbeknownst to these women – and millions of people later on in his life – is that part of his “whole package” charm was actually false. A secret he told very few people, and something that showed up in every single photo he took.

There is one very rare exception to that rule, though. And it is a portrait from his childhood that now hangs in Graceland…

Elvis Presley with brown eyes?
Find out the story behind this photo in my review of #ElvisPresley: The Searcher – Click here: https://t.co/GZoavmLoQm pic.twitter.com/zsWDCaOrDk

Elvis Presley’s striking “ice blue” eyes were a dominating part of his persona and unstoppable sex appeal to throngs of women across the world. People swooned at posters of The King and pined to gaze into the gorgeous lake of blue inside his eyes – but photos of him with brown eyes have surfaced.

Yes, he had brown eyes for a time, but that’s not the secret his photos are hiding. The secret is much darker…literally.

Presley donned brown-colored contact lenses for his role in Flaming Star. For that movie, he had to have brown eyes “because you couldn’t be part Native American with blue eyes” – according to the director.

The very talented Dolores del Rio, who spoke of Elvis in the press with high regard when Flaming Star was released, saying: “My young black panther, he is a fine young man. He has the look of a Latin. He is dark and lithe. He moves like a cat. He is a good actor and I even like his singing. I would like him for a son”. Elvis returned the compliment, saying: “Miss del Rio is a fine actress. She helped me a lot through the film. I am grateful and proud that I am permitted to play with her”. #ElvisPresley #doloresdelrio #flamingstar #filmsofelvispresley #teamoelvis?❤️ #weloveyouking

Even while filming this beloved movie, Elvis’ secret was alive and well. Each photo, regardless if he’s wearing contacts, still shows it clear as day.

To many, one of the most striking parts of Elvis were his gorgeous locks of jet black hair. Hair so dark that it was like looking into a black hole. Perfectly coifed in a stunning way for every single photoshoot, always on-point while he was making appearances, but cute and messy when he was relaxing at home.

But, Elvis never had black hair.

Born a natural blonde, Elvis Presley began dying his hair black from a very early age. Because of this only one photo of him with his natural hair color exists – and it is framed on the wall of Graceland.

Since he was a teenager, he started dying it with shoe polish as a cheap alternative to hair dye. Back in those days, cosmetics were an expensive luxury only a few could really afford.

Later in his life, Elvis opted in for a signature mix of hair dyes: Miss Clairol 51D and Black Velvet / Mink Brown by Paramount. Due to this, every single photo you will see of him features super-dark black hair.

He was so obsessed with keeping his hair black that he even made Priscilla Presley dye her hair before their wedding.

From start to finish, it took less than ten minutes…but why did Elvis have the vows changed?

Check out the video below that shares more hardly-known facts about Elvis Presley – and tell us in the comments if you knew he was blonde all along!