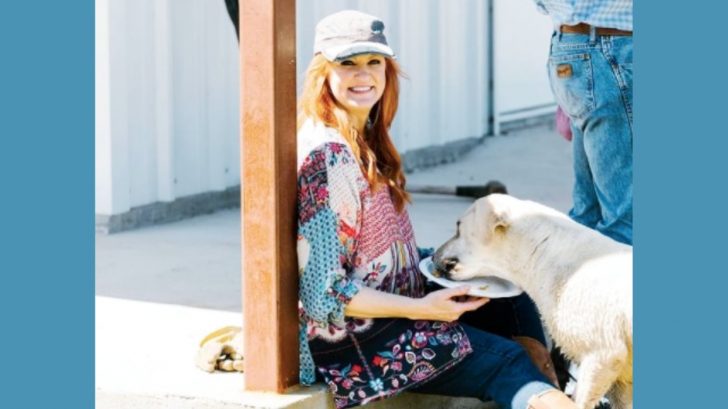 At this point, Ree Drummond is more widely recognized by her nickname, “The Pioneer Woman,” than by her own name. “Pioneer Woman” branding appears on her cookbooks, TV show, magazine, home goods, dog treats, and so much more!

But have you ever wondered how Ree came to be known as “The Pioneer Woman” in the first place?

In a blog post published in 2020, Ree explained how her popular nickname came to be, and why it stuck. Turns out, it all started as a joke!

Even though Ree was born and raised in Oklahoma, she was not familiar with country living. She grew up in a house that overlooked a country club and went to college in Los Angeles. After graduating from USC, Ree planned to attend law school in Chicago.

But the city girl quickly went country when she met, fell in love with, and married her husband, Ladd.

“I was literally THE last person anyone ever pictured moving to the country,” she said on her blog. “When I announced my engagement to a cowboy, my childhood friends couldn’t believe it.”

Knowing her background, Ree’s family started joking with her that she was a true “Pioneer Woman” since she was married to Ladd. But Ree knows she was far from it!

“Actually, when I first moved to the ranch, I was a fish out of water in basically every way,” she said. “Those were some rough days (weeks…months…years) of transition.”

A few years after Ree and Ladd got married, the “Pioneer Woman” nickname resurfaced. The Drummonds lost water pressure at their house and had no running water for four months. So Ree had to do things the old-fashioned way to wash dishes and perform others tasks:

“I hauled in water, boiled it on the stove so I could wash dishes, and did what I had to do to get by,” she said. “A neighboring ranching friend, upon hearing of my plight, called and told me I was a real Pioneer Woman—only this time it wasn’t a joke! If I hadn’t been so busy hauling water at the time, I might have stopped to revel in the title a little more.”

Once Ree started blogging (which is how she initially became famous), she used “Pioneer Woman” in the name of her blog. It started off as Confessions of a Pioneer Woman, but eventually became simply The Pioneer Woman.

Now the “Pioneer Woman” nickname has become something bigger than Ree ever could have pictured! Learn more about Ree and the food she loves by watching the below video of her top “comfort food” recipes.