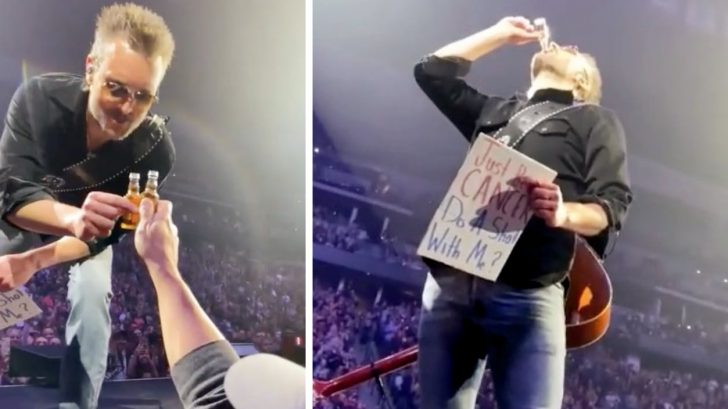 In 2020, Eric Church took home the CMA Award for Entertainer of the Year. He has lived up to that title ever since, as he continues to put on entertaining concerts night after night.

Eric’s schedule was pretty packed in 2021. He toured all over the place, with one of his stops being in Denver, Colorado.

“Just beat cancer. Do a shot with me?“

The man who was holding the sign attended the concert with his son, Sebastian Dobyns. Sebastian filmed what happened after Eric noticed his dad’s sign, and shared the video on TikTok.

Eric knew he couldn’t turn down the man’s request. The man reached forward and handed Eric his sign and a tiny bottle of Jack Daniel’s.

The crowd was cheering and applauding as Eric walked around the stage and showed them the man’s sign. Then he came back to the man, they clinked bottles to say “cheers”, and took their shots.

You could see the man was crying as Eric handed him his guitar pick and returned the sign. The two shook hands before Eric walked away to continue the show.

You can watch the video below.

This was such a kind thing for Eric to do. Sebastian and his dad will remember this moment forever.