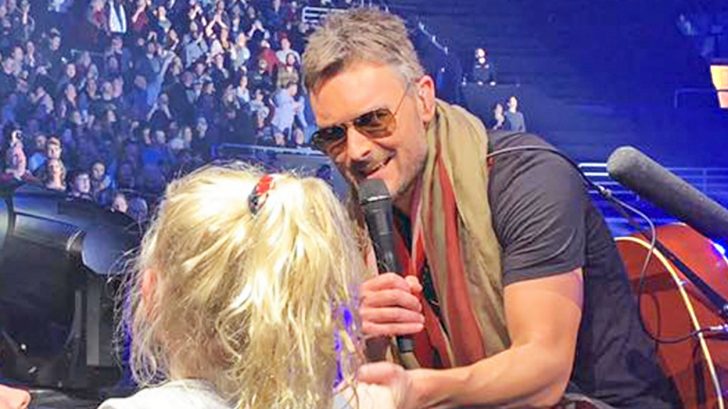 One concert-goer got the surprise of a lifetime when country rockstar, Eric Church, personally greeted her on stage. While fans have gotten high-fives and smiles from their favorite stars, this little girl got a full-blown serenade.

While on his Double Down Tour, Church has been giving fans the experience of a lifetime. From his stage presence to his insane vocals, the crowd can’t get enough. The tour expands into 19 cities where the singer will perform two completely unique shows in each city. While fans lined up to get their hands on a pair of tickets for the six-month-long tour, two parents got an extra seat for their daughter’s first concert.

Memory Of A Lifetime

At Church’s January 25th show in St. Louis, he noticed one fan sitting front row having the time of her life. While the singer was rockin’ out to his hit, “Springsteen” he made his way over to the little girl. While her mom propped her up, Church bent down to hold her hand while still singing. Clearly loving his newest fan, he then proceeded to sit down on the stage and sing with her!

It was an unforgettable experience for both her parents and girl! Her dad took to Twitter saying,

“I sure would like to thank @ericchurch for connecting a melody to a memory last night for my 9 year old at her first concert. It sure made her night. Time to double down tonight, with just the adults!”

The 2012 hit, “Springsteen” had an overwhelming success following its release. The single debuted across all the charts and hit No.1 on the Billboard Hot Country. It later went on to be 3x platinum certified in the United States. The song has gone on to be one of Church’s most well-known singles and clearly, a crowd favorite at concerts.

6 years ago Eric Church's "Springsteen" was certified gold by the RIAA. #MusicIsLife

Watch the sweet moment between Church and his newest fan below!

I sure would like to thank @ericchurch for connecting a melody to a memory last night for my 9 year old at her first concert. It sure made her night. Time to double down tonight, with just the adults! #DoubleDownTour pic.twitter.com/o4KVF0ECCu