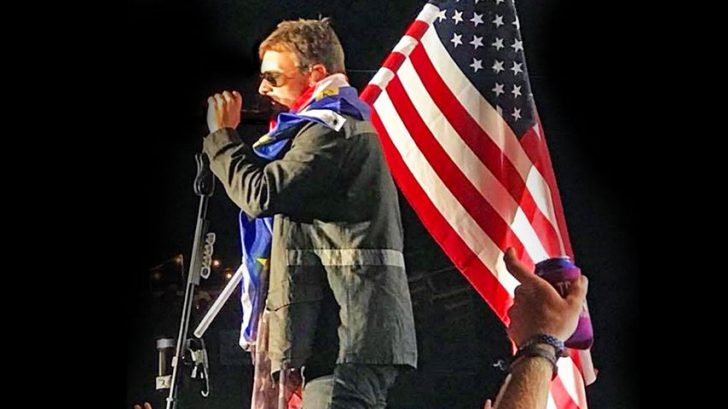 Pain filled the air at Country Concert 2018 in Ft. Loramie, OH as country star Eric Church climbed back on stage after the sudden passing of his younger brother.

Eric, who lost his 36-year-old brother in June 2018, turned to what he knew best for comfort – his music and faithful fans. Perhaps the stage was the only place he felt he could lose himself and still be connected to hundreds of healing heartbeats.

“My heart was breaking for him as he performed. He feeds off of the fans, though! [Church] said, ‘I think I need this more than you do‘,” shared fan, Veronica Krupp Kummer on social media.

Eric’s younger brother, Brandon, went into cardiac arrest on June 29, 2018 after suffering multiple seizures. He passed away en route to the hospital.

The two brothers wrote several songs together including the final tune of big brother Eric’s heartfelt acoustic tribute,”Sinners Like Me.” Like a true professional, Church sang through the hurt and gave his audience “200%.” He leaned on them for support and they responded in like style.

The Chief is getting ready for tour. The countdown is on. 2 days away.

His eyes, hidden by sunglasses, couldn’t conceal the pain of his recent loss. Emotion clung to every word spoken and every lyric sung. The significance of Eric’s opening number was not lost on the crowd. He hugged those in attendance with an emotional delivery of “Footlights” by the legendary Merle Haggard.

The Hag’s son, Ben Haggard, best explained the meaning of “Footlights” in an interview with Hollywood Life, saying, “[‘Footlights’] talks about a guy, having to go out there even if his heart is breaking. It’s about  going up on stage to try to give those people a good show and give them their money’s worth, despite your heart’s breaking inside or you miss somebody, along those lines. The show must go on.”

And the show did go on. If for no other reason than music and connecting with people. The “Desperate Man” singer addressed the country crowd by reminding them of how very short life really is.

“We’re only here for about this much time,” he offered, holding his thumb and forefinger together displaying less than an inch of measurement.

Eric Church Thanks The Fans After His Brother's Passing

Eric Church to the fans after his brother's passing: "Tonight…I needed this more than you."Chills.

Concluding, Eric assured the audience, “I appreciate tonight more than ever, know that.”

The show WILL go on.

This video will give you goosebumps.