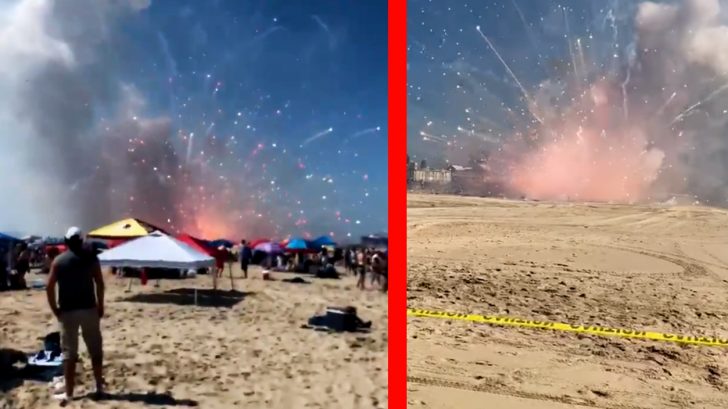 Just hours ahead of the city’s annual 4th of July firework show, an entire truck full of fireworks exploded on the beach – injuring multiple employees of the fireworks company.

According to Channel 13 – WVEC, a crowded beach full of people in Ocean City, Maryland saw an unintentional explosion of a huge stockpile of fireworks intended for the evening’s Independence Day celebration put on by the city.

DUE TO AN ABUNDANCE OF CAUTION, ALL FIREWORK SHOWS IN OCEAN CITY CANCELED https://t.co/AyKUWkMnGk #oceancityfireworks pic.twitter.com/82pQN5L7sE

When the explosion first happened, emergency responders believed there was a vehicle fire – but, upon arrival, they realized it was the massive amount of fireworks that had been prepped for the event later in the evening.

Video footage from many angles quickly started appearing on social media, and one shows just how close the explosion was to a huge crowd of people. In the clip, the fireworks start firing off in all different directions and force many at the beach to run for safety.

Ocean City Fire Department reported that several employees of the fireworks vendor were injured but refused transport to the hospital due to the minor nature of their wounds.

“On Sunday, July 4, 2021, the Ocean City Fire Department was alerted for a vehicle fire at Dorchester Street and the beach.
Firefighters arrived to find that no vehicle was on fire; however, there was an unintentional discharge of fireworks that were being set up on the beach for the Town’s fireworks show.”

“During the unintentional discharge, employees of the fireworks company received minor injuries and refused transport to the hospital by Ocean City Paramedics. No beach or boardwalk patrons were injured.”

Following the explosion, the fire department immediately closed off nearby areas to public access and began a safety inspection of all firework stockpiles that had been prepared for evening shows. The city also canceled all of the firework shows they had planned.

See all the videos below.

So this just happened in Ocean City, MD. pic.twitter.com/B0djA8JxF7