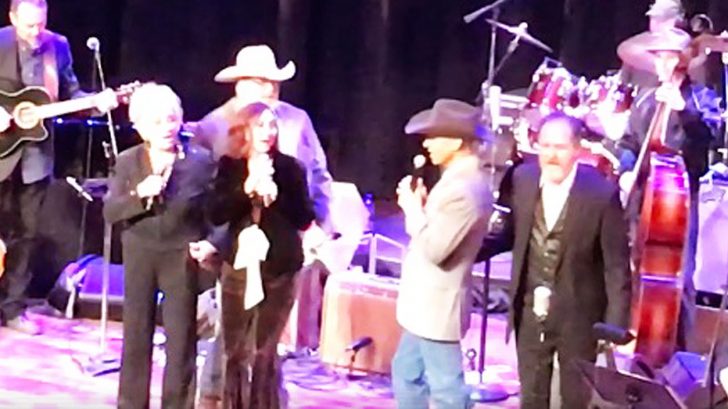 On November 19, 2017, country music lost one of its last living legends…Mel Tillis. Known for songs such as “Coca-Cola Cowboy” and “I Ain’t Never,” Mel was one of the leading voices in country music for decades.

Mel remained active as a performer for as long as he could, until intestinal issues started keeping him from the stage in 2016. He never fully recovered.

After Mel passed away, a public funeral was held at the Mount Hermon Baptist Church in Clarksville, Tennessee. He was laid to rest during a private burial.

Following the funeral, the Tillis family revealed their intentions to host a public memorial service for Mel at the Ryman Auditorium in Nashville, Tennessee. That memorial service took place on January 31, 2018, and featured tribute performances from some of classic country music’s brightest stars.

Just a few of the artists who honored Mel at the memorial were Ray Stevens, Lorrie Morgan, and Alison Krauss. Three of Mel’s children were also on hand to perform, including his daughter Pam.

Like her father, Pam has experienced great success as a country music artist. She is best known for her number one hit “Mi Vida Loca (My Crazy Life)” as well as the Top Ten hits “Don’t Tell Me What to Do,” and “Shake the Sugar Tree.”

As expected, Pam played a key role during the memorial service. She took part in a number of performances, including one featuring a group of other artists. That group consisted of many familiar faces, including Jamey Johnson and Brenda Lee.

With Pam leading the charge, the group glided through a tender performance of Bobby Bare‘s “Detroit City.” Mel actually co-wrote the song, making it a fitting choice to perform at his memorial service.

As they neared the end of the performance, Pam told everyone that her father always loved it when people sang along to the song during his performances. So she encouraged everyone in the audience to stand up and join them, and they did just that.

It was incredibly touching to watch the entire Ryman crowd rise to their feet and sing in honor of Mel. If you were unable to attend the memorial, you can see Pam lead the other artists and the audience in the “Detroit City” tribute by watching the video below.

We still can’t believe that Mel is gone. He is so dearly missed…