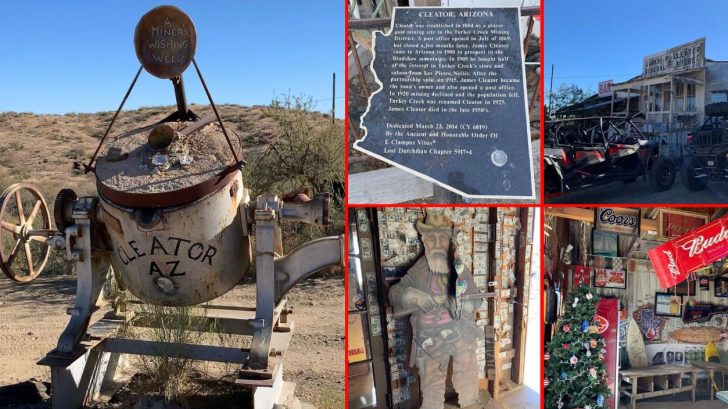 According to real estate agent Justin Godsey, a historic ghost town just an hour and a half north of Phoenix, Arizona called Cleator just sold for $956,000.

“You can own this ENTIRE town! Think about that…ownership of your very own town and those endless opportunities. Naming rights? You got it!” Justin Godsey wrote on his website Buy Cleator.

The town with a tiny population is located 3,500 feet above elevation on a bumpy road off Interstate 17 near Mayer, Arizona. Many consider it a ghost town but ATV riders frequently visit and there is still a popular bar The Cleator Yacht Club that is alive and doing well.

There is a general store and a few other original structures there to see and even though there are just a few locals, their reputation is very friendly.

“It is up to you to decide whether to continue the tradition and legacy of Cleator, or explore new opportunities for this historic piece of Arizona. Also included are mining rights, the existing structures, the land & of course the legacy of a true Arizona ghost town,” Justin said.

Justin also filmed a well-documented video tour showing the town of Cleator with his high-tech cameras, drones, and intellectual knowledge of the place.

Cleator was originally established in 1864 just two miles from Turkey Creek after gold was found and a gold mining site was setup under the name Turkey Creek Mining District.

A railroad station eventually got established near the mining site in 1902 and with a community of miners, stores and other amenities began to spring up in the area.

It wasn’t until 1925 that the townsite became known as Cleator, mainly because James P. Cleator who owned the town name the post office after himself in 1903.

The town was put up for sale by James Cleator in April 1949 and at the time it had about 60 residents. Nobody purchased it and James died in 1959 so the town was passed down to his son Thomas who lived there until his own death in 1996.

After Thomas’s death, everything was inherited by his sister Eleanor and her son who gave it to real estate agents in 2020 to put on the market for $1.25 million.

At the time there were about eight residents but no one purchased it, so the price dropped to $999,99 until eventually, someone bought it for $43,999 cheaper than the asking price.

See & Learn More About Cleator In The Video Below