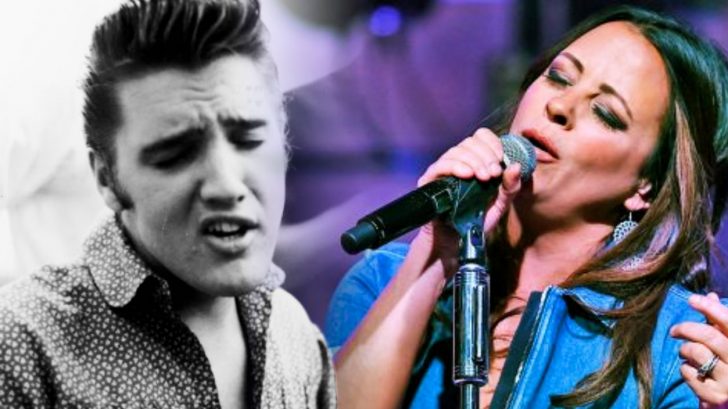 Sara Evans was only six years old when Elvis Presley passed away in 1977. But years after Presley’s passing, the “A Little Bit Stronger” singer got the chance to create a duet with him.

In 2008, RCA Records released a posthumous holiday album from “The King.” Titled Christmas Duets, the record contained updated, duet versions of some of Presley’s most iconic holiday recordings.

The power of technology combined Presley’s old vocal tracks with new recordings from modern country and gospel artists to create virtual duets. Carrie Underwood unites with Presley to sing “I’ll Be Home for Christmas,” while Martina McBride had the honor of singing “Blue Christmas.”

As for Evans, she joined Presley to sing one of the most beloved Christmas songs of all time…”Silent Night.”

The famous carol was composed in 1818 by a man named Franz Xaver Gruber. He crafted the song in the small town of Oberndorf bei Salzburg, Austria.

Years later, the song went on to become one of the most well-known musical pieces in the world thanks to Bing Crosby. His recording remains the fourth best-selling single in all of music history.

Presley’s old recording of “Silent Night” is also well-loved, so it only made sense to revive it for his Christmas Duets album.

Evans’ voice is a lovely addition to the updated version of the track. You get the chance to hear her sing on her own after Presley opens the song.

But the best part comes when Presley and Evans’ voices unite. Those who crafted the virtual duet did an excellent job, making it sound as though Presley and Evans were singing at the same time in the same place.

Those who didn’t know any better would just assume that Presley and Evans were standing side-by-side as they sang in celebration of Jesus’ birth. You can witness the splendor of their virtual “Silent Night” duet by clicking “play” on the clip below.

This recording is something Evans is sure to treasure for the rest of her life.