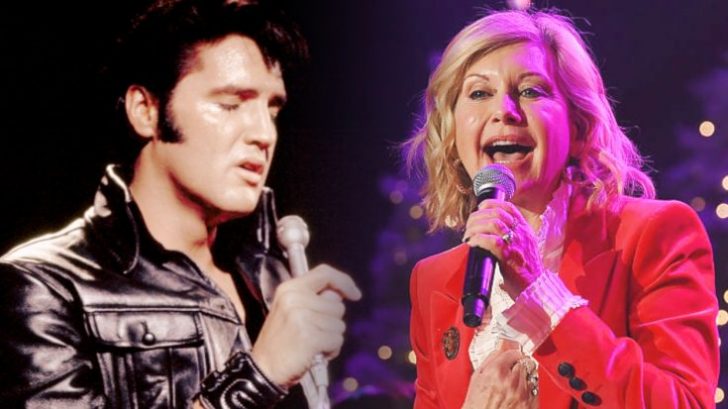 In 1978, actress and singer Olivia Newton-John appeared as the character Sandy in the musical film Grease. The movie catapulted her into stardom, and it remains her most iconic project to date.

Watching the film, there’s no denying that the look of Sandy’s love interest, Danny (played by John Travolta), resembles that of a younger Elvis Presley.

But “The King” never got the chance to see the movie. He passed away a little less than a year prior to its release.

Coincidentally, the film’s song “Look at Me, I’m Sandra Dee” contains a line about Elvis. The cast, including Olivia, filmed that scene on August 16, 1977…the day of Elvis’ passing.

Elvis’ loss also signified the loss of great music he never got the chance to make. But although his career was cut short, his legacy has lived on thanks to many successful posthumous albums and compilations.

Some of Elvis’ most beloved tracks are his Christmas recordings, which range from his sultry rendition of “Blue Christmas” to his distinctly rockabilly version of “Here Comes Santa Claus.”

In 2008, Elvis’ holiday recordings took on new life in an album titled Christmas Duets. With the use of a little Christmas magic, the album united Elvis’ vocals with those of famous female country singers, including Carrie Underwood, LeAnn Rimes, and Gretchen Wilson.

The most successful release from the album was the updated rendition of “Blue Christmas,” which featured Martina McBride alongside Elvis. Released as a single, their duet claimed the 22nd spot on the Adult Contemporary chart and the 36th position on the Hot Country Songs chart.

Years after she starred in Grease, Olivia got the chance to unite with Elvis as one of the featured vocalists on Christmas Duets. The two performed the longstanding Christmas carol, “O Come, All Ye Faithful,” and the result was pure bliss.

Olivia’s sweet, delicate voice couldn’t be any more different from Elvis’ huskier sound. But you know how it goes, opposites attract, and such is certainly the case when it comes to these musical icons’ Christmas duet.

Go ahead and treat your ears to the heavenly sound of Olivia and Elvis’ rendition of “O Come, All Ye Faithful” in the clip below.

It’s amazing what technology allows us to do these days. Without it, this gorgeous duet never would have been possible.