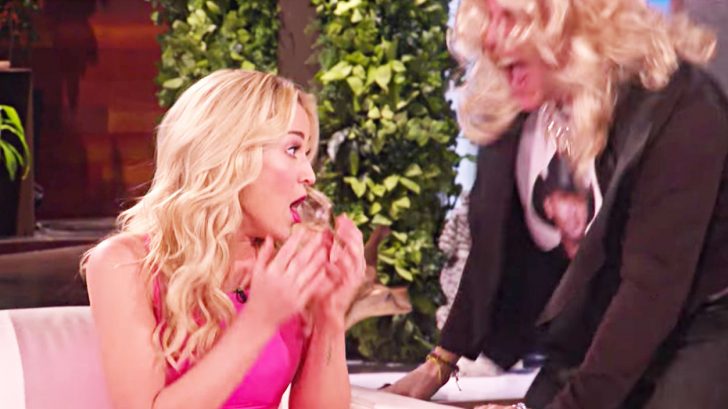 One of America’s favorite country gals got the scare of a lifetime during her recent trip to visit Ellen DeGeneres on the set of her talk show, The Ellen DeGeneres Show.

OMG KELLIE PICKLER IS GONNA BE ON ELLEN AGAIN pic.twitter.com/W1VI3vjiTN

Kellie Pickler, who – at the time – just recently had her own daytime talk show renewed for a second season, popped on over to see her old friend Ellen. But she wasn’t prepared for the surprise that was in store.

Kellie Pickler Gets Pranked by Ellen DeGeneres … and a Geisha [Watch] https://t.co/0THdAV5tzB pic.twitter.com/X1NvbH4SA4

Pickler, who has been friends with Ellen for more than a decade, has made many appearances on the show – plenty which left her shaking in her boots after one of Ellen’s famous “scarings.”

Kellie Pickler Stops by #Ellen To Talk About . . . Her Husband’s #Snoring? https://t.co/zKQFWtjWy2 pic.twitter.com/5etj8WntS3

Together, singer/songwriter and reality TV star Pickler giggles along with Ellen as the jokes keep rolling. They started talking about her television show, Pickler & Ben, and how country music’s own Faith Hill was her boss.

“We had met in passing at events…so obviously I knew who she was,” Pickler explains of her former personal history with Hill. “It’s so interesting because growing up and watching all her videos and being a fan of her music, and supporting her career – I never thought that she would be, like, my boss lady!”

Continuing to talk about how much she enjoys working alongside Hill, Ellen gave Pickler the shock of a lifetime when “Faith Hill” popped out of the coffee table sitting between the two stars.

Truly, Pickler had the living daylights scared out of her when this imposter screamed in her face and Pickler’s own expression was one of pure terror!

Even though Pickler & Ben has since been cancelled, we still enjoy watching this video of her “boss” scaring her. Watch this hysterical video below!