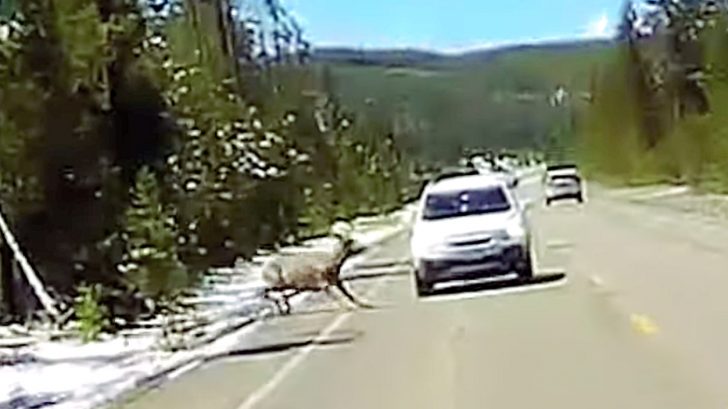 Matt Fluke from Idaho Falls was taking his family on a trip to Yellowstone National Park for a picnic when they captured something they will never forget on video!

Video footage from Matt’s rearview camera on his car showed the moment the family was driving down the road and an elk ran out of the woods at full speed and slammed directly into the SUV driving behind them.

The impact the elk made on the SUV was so hard that it totally knocked the poor creature out and it fell limp, laying on the road.

If that wasn’t shocking enough, within a second of that happening, a big black wolf emerged from the trees on the side of the road and pounced onto the elk, securing a meal for himself and his pack.

Matt told East Idaho News, “I didn’t look at my dashcam video until I got back to where we were staying at. Originally I thought it happened behind that car. We pulled over for a second and saw the elk on the road and the wolf with it.”

The family sat there for a while and watched the wolf, the elk, and nature taking its course, along with other visitors who were pulling over to stop and watch.

“There was a turn out real close and lots of other cars stopping around there. You could see it from where we were at and the car that was behind me pulled over and then pulled out and went down the road… it was wild.”

As the family was pulled over, they watched the feeding go down from their rear window.

“Traffic was backed up all the way through West Yellowstone (as people waited to enter the park),” he says.

Eventually, Mike and his family went on to finish out their vacation but took along with them one hell of a story to tell their friends and family later.

Watch The Full Video Below Of Elk & Wolf