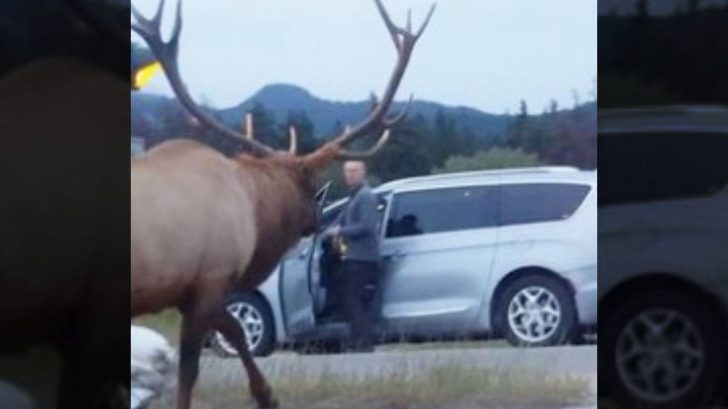 Along with lots of wildlife, Jasper National Park is home to the gorgeous glaciers of the Columbia Icefield, springs, lakes, waterfalls and mountains.

Some of the beautiful wildlife you might see when visiting Jasper National park are elks.

It should go without saying, but when you spot wildlife out in their natural habitat, you should leave them be and if you want to take pictures, you shouldn’t approach them. At some parks, like Yellowstone, there are mandated rules that state you have to stay at least 25 yards away from wildlife. One woman did not abide by this rule and got as close as 25 feet away from an elk. The animal did not like that so it charged at her and bucked her to the ground.

A tourist at Jasper National Park almost had a similar fate. One person was taking a video of an elk on the side of the road. It was making a noise as though it was yelling at someone! Then the camera pans to what the elk was looking at, which was a man who had gotten out of his vehicle to take a photo of the animal. The elk began charging towards the man.

He immediately panicked and got back in his van, without a second to spare! Watch the video below and if you spot wildlife when you’re out and about…just stay in your vehicle!