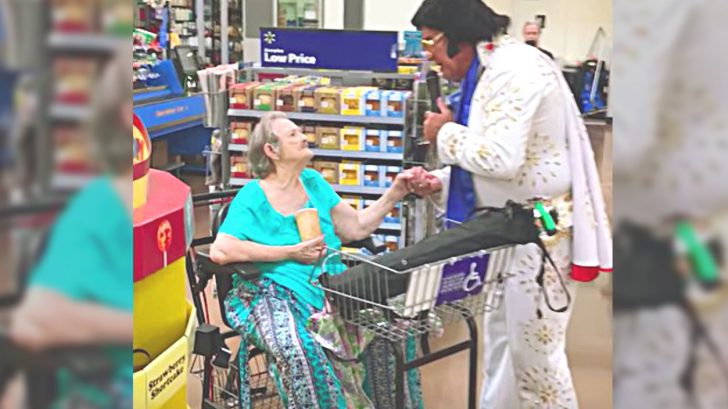 If anyone defines the term “global superstar,” it would be Elvis Presley. Even now, decades after his death, Elvis’ music continues to be beloved by people of all generations.

Because of Elvis’ overwhelming popularity, he is perhaps the most frequently impersonated celebrity of all time, especially in Las Vegas. You sure don’t have to wander far in Sin City to find someone who looks, dresses, and sings like “The King.”

But Las Vegas isn’t the only place where you can find Elvis impersonators. There’s apparently at least one in Arkansas, but he doesn’t perform on a glittery stage. He sings in Walmart.

Shopper Don Luper was just going about his day when he spotted an Elvis impersonator in his local Walmart. Dressed in Elvis’ signature bedazzled jumpsuit and carrying a microphone, he started singing one of “The King’s” most beloved songs, “Can’t Help Falling in Love.”

Luper started filming the impersonator, who made his way down the front of the store near the registers. He got a few glances as he sang, but no one really seemed to pay him much mind.

People started paying a little bit more attention when he walked up to a man in the checkout line and started to rub his bald head. A few shoppers couldn’t help but laugh at that.

But it was the impersonator’s next interaction that caught the most attention.

After he finished singing to the bald man, the impersonator made his way over to another shopper and kept singing. Luper’s camera followed him, and the object of Elvis’ affection was left out of the frame for a second.

Luper moved the camera a bit, and it was revealed that Elvis was singing straight to an elderly woman who was using a wheelchair.

The woman was quiet for a moment, and silently nodded along with Elvis as he sang. Then all of a sudden, she started singing right along with him, knowing every word to the song.

Their duet became all the more touching to witness when Elvis reached out and held her hand as he sang “take my hand” in the song.

The two continued to hold hands for the remainder of the duet:

“It seemed like the lady was taken back in time and was singing to the King himself — it had clearly made her day,” Luper said in an interview with Caters.

After they finished their duet, Luper said that Elvis gave the woman his blue scarf and a kiss on the cheek. You don’t see that moment in the video, but what you do see is just as sweet.

Dare you not to cry when you watch this…