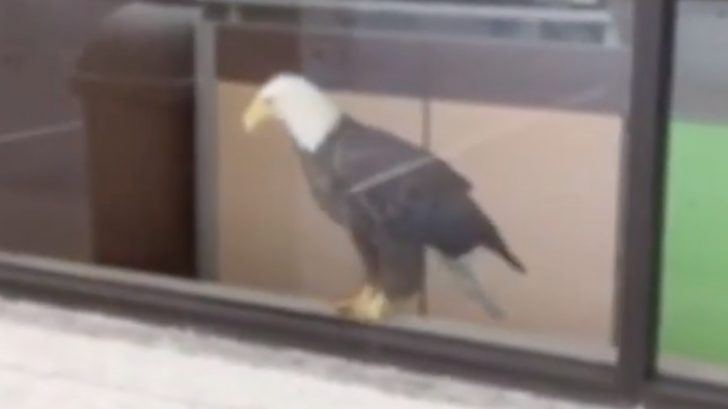 Harry Patterson Jr., a Virginia Beach resident was pulling into his Allstate Insurance office when he noticed something strange sitting in the window of the H&R Block next door. It was a full-grown bald eagle staring directly at him.

“I was on the phone with a friend and saw it on the inside ledge,” Harry told The Virginian Pilot. “I figured it was a stuffed animal. Then it started to move. I couldn’t believe there was a bald eagle in there and I couldn’t believe what I was saying to myself.”

Apparently the bird flew into the H&R Block’s quarter-inch plate glass and somehow busted through it leaving a massive 3-foot hole. The eagle was reportedly carrying a dead seagull it had been eating on in a grassy field across the street.

A lady and her son who had been eating next door at a restaurant witnessed the bird feasting on the seagull and said it all of a sudden took off. Within moments, however, they said they heard a loud bang on the glass window next door.

It wasn’t long after that Harry pulled up to the office and saw the eagle just walking back and forth on the inside of the window, so he started taking a video of it. Eventually, the bird found the hole that it made on its way in and exited the same way it entered.

Harry filmed the eagle taking off and was amazed that it wasn’t injured. Authorities were called and once Wildlife rehabilitator Rochelle Stewart showed up she too was equally impressed that the bird wasn’t hurt. She watched the video and said it appears “it flew away pretty good.”