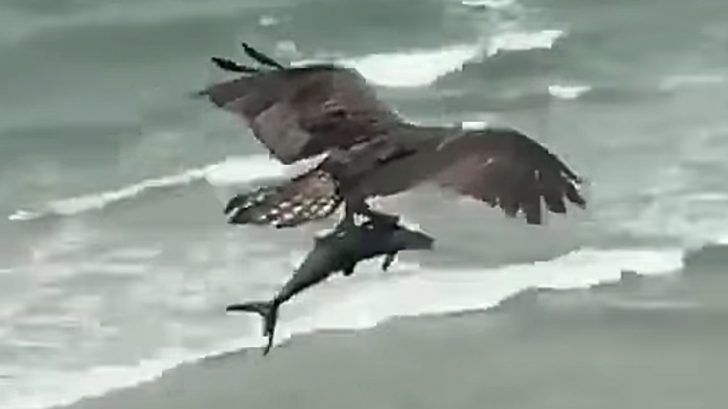 Carrick Talmadge, a Senior Research Scientist at the University of Mississippi, was enjoying a beautiful day at the beach with his wife Nita when they spotted an eagle soaring over the shoreline with a decent sized shark in its claws.

“You can't choose to be physically bigger than your competition, but you can always choose to be stronger, better, tougher! It's all up to you ?”

The eagle catches the shark and flies over the Myrtle beach, South Carolina ???? pic.twitter.com/YQXG2psZs6

The video was posted on Carrick’s Facebook account on July 2nd, 2020, and by that next Tuesday, it had already reached over 17 million views. With the 4th of July spirit in the air, it couldn’t have been a better time to share it. Mesmerized viewers watched as an eagle that looked to have a wingspan of five to seven feet carried what Carrick says was a shark in its talons.

The bird had both talons dug deep into the shark’s body. One was dug into the upper side of the fish while the other was dug into the lower side of it. The eagle rode the strong winds coming off the ocean like a rollercoaster and soared from the beach to staggering new heights.

They must have been a few hundred feet off the ground when the shark, in one last desperate attempt, tried to wiggle as hard as it could to escape the grasp of the eagle’s talons, but the eagle held on with all his might and the shark stayed clutched within his grasp.

Carrick wrote in the caption of the video, “An eagle snatching a shark from the ocean is so 2020. This was from Wednesday at Myrtle Beach.”

Watch The Eagle & Shark In The Video Below

An eagle snatching a shark from the ocean is so 2020. This was from Wednesday at Myrtle Beach.