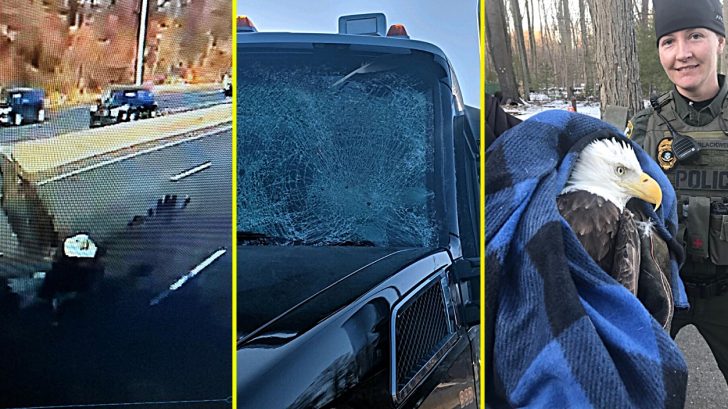 Scott Burke was driving in Connecticut down Route 95 in his 18-wheeler tractor-trailer when an eagle with a seven-foot wingspan flew right into his windshield. His dashboard camera got everything on video.

Driver Scott Burke of the SRS National LLC Trucking Company out of Southington, CT had a dash camera on the passenger side of the Truck. Jerry Beaudoin, owner of company sent this wonderful version of the incident that occured on January 22, 2020 on Route 95. Both bird and driver are ok. Drivers side windshield is shattered.Eagle is recovering at APCH from the impact and showed evidence of internal bleeding… which keeps her condition guarded. Good news is nothing is broken and we are amazed at this! She is one lucky bird and Scott one lucky driver. Goal will be a release once we are confident her bleeding has subsided.

The bird was apparently swooping down to grab some roadkill but was spooked off by a car when it blew its horn at the eagle. As the bird tried to fly out of the way that’s when she collided with Scott’s truck and completely shattered his windshield.

Scott said it happened so fast. He saw her coming out of the corner of his eye but there was no way of stopping in time. After the impact, he slowed down for another 1000 feet until he could come to a complete stop while the eagle hung onto the side of the truck.

She then dropped down and sat under the truck in shock. Scott immediately called the police and an environmental police officer arrived on the scene to safely escort the eagle to an animal rehabilitation center called A Place Of Hope.

“She was strong, but still stunned so we hurried her along to a dark and quiet space so she could gather her wits,” A Place Called Hope said on Facebook.

They ran x-rays and determined that the eagle didn’t have any broken bones or fractures. However, they did see that it had been shot at once before. Due to the impact, she had some internal bleeding and blood in her mouth and trachea.

Fortunately, the bird is eating again and looks like she’s going to make a full recovery. She’ll stay at the animal hospital until she’s fully healed and then they will return her back to the wild. Scott said in the 25 years he’s been driving that was the scariest thing he’s ever experienced on the road.

On Wednesday, January 22, 2020 an adult Bald Eagle made a near fatal call. This female was scavenging food along Route…