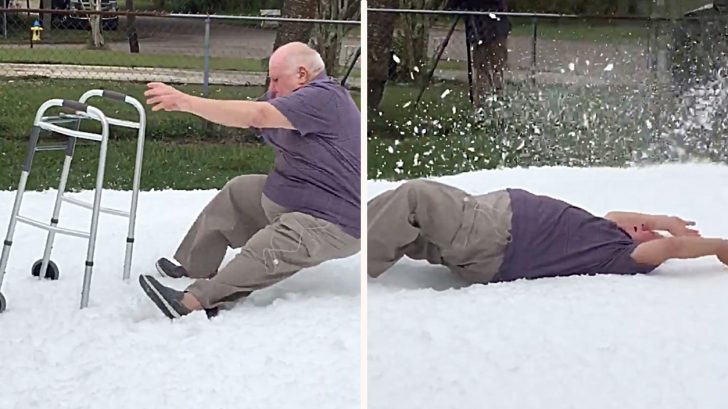 76-year-old Albert Septien is a Vietnam War veteran from Florida who has terminal cancer and when he found out what that he didn’t have long to live he had one last request, to make a snow angel.

Albert was diagnosed with melanoma and recently he learned from his doctors that his stage four cancer had gotten worse since last month. The doctor said that this would most likely be his last Christmas to spend with his family.

His family wanted to give him something special so they asked him what he wanted for Christmas and he said with a smile that he just wanted to make a snow angel. So with the help of the Tampa Bay community, they all gathered bags of ice and got started.

In his front yard, they created 8-tons of fake snow using hundreds of bags of ice and when it was ready they brought Albert outside to look at it. When he saw the snow the veteran instantly began to weep. Not only did he get his snow but he was also surrounded by all his family and friends to celebrate him getting his wish.

“To feel the coldness, all of that, it was really good. I was soaked, even to my underwear, but it was great,” Albert told WFLA.

When asked how he got the cancer Albert believes he received it in the 60s when he came in contact with Agent Orange. During the years of cancer, his treatments have caused his skin to burn all over and laying down in the snow felt really good to him.

His cousin Joe Maestre said that words cannot explain the look in Albert’s face when he saw the snow. The big smile he had, the happy tears rolling out of his eyes and watching him play in the snow meant so much to him and the family.

How often do you get to be a part of a Christmas Miracle? Black Dagger Military Hunt Club Inc , with the help of Donations from many generous loving people made Albert Septien’s Christmas wish come true❄️. Albert is a Vietnam Veteran that has stage 4 Melanoma, believed to be caused from exposure to Agent Orange. Doctors say this may be Albert’s last Christmas. His wish was to make a Snow Angel like he did in Connecticut as a boy. He got his wish today…