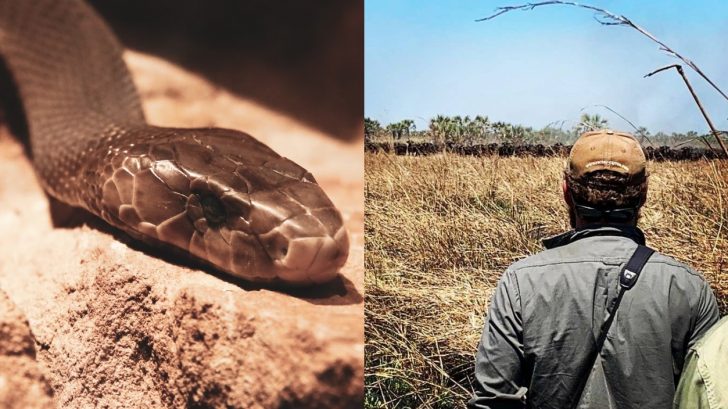 40-year-old Sebastian Wicker, who was working as a land manager in Mozambique, Africa left a heartbreaking final voice message to his wife as he lay dying due to a highly venomous snake bite.

His wife Amanda said the incident happened in mid-September 2022 while he was out on a safari. He left a voice message just six hours before he died in which he emotionally told her how much he loved her.

Amanda said she sent him a reply to his message but he never opened it to hear what she said. Later she received a phone call from one of his co-workers telling her the horrible news that her husband was dead.

According to the Daily Record, his wife said, “In the message after the snake bite you can hear that he is losing consciousness. I sent him a message back but he didn’t open it. One of his work colleagues phoned me in tears to tell me he had died. Then I just burst out crying. It is still such a shock. Sebastian had been attacked by buffalo in the past but a snake attack like this is almost unheard of. It is the first thing such a thing has happened out here in 30 years. The odds of being attacked by a snake are so slim.”

Sebastian, his colleagues, and a safari client were spotting buffalo at a termite mound when he was bitten by the snake. Wildlife experts say that snakes and other reptiles usually like to live inside the holes in mounds.

They never recovered the snake but Amanda says her husband was probably bitten by a forest cobra or a black mamba, which are two types of extremely venomous snakes that are commonly found in Africa.

Sebastian’s client had a dose of anti-venom with him which was given to him before they drove him to the Marromeu Hospital about 45 minutes away from where the incident happened.

He was still alive but in poor health when he arrived at the hospital, however, this hospital didn’t have any anti-venom so he was quickly rushed to Beira Private Hospital by helicopter. Unfortunately though, when he arrived, it was too late. The venom had taken its toll on Sebastian’s body and had sadly passed away before he got there.

According to the Daily Record, his heartbroken wife explained, “He had a very painful death and had to be given morphine. He was vomiting severely and struggling to breathe at the end. His tongue was swollen and it was a horrible way to die. I can’t imagine how he must have been suffering. It hurts to think about it even now.”

Sebastian was in Mozambique, Africa while his wife and son Oskar were living in Scotland where they were on the path to starting a new chapter in life as a family. She said he was expected to come back home in December and continue his work in Fort William.