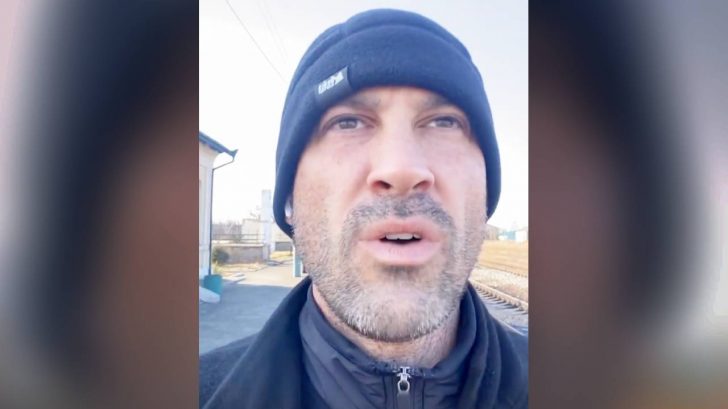 Less than two weeks ago, former Dancing With The Stars champion Maksim Chmerkovskiy was filming episodes of World Of Dance in Kyiv, where he appears as a judge.

On February 7th, he shared a celebratory post revealing his new job, as well as being back in his native country of Ukraine and being able to see the “top professional dancers of Ukraine.”

Sadly, his time in Ukraine has not been as incredible as he had hoped it would be. For the past few weeks, Russian president Vladamir Putin has been readying his troops at the Ukranian border and launched a “full-scale attack” on the country this week.

According to USA Today, Putin claims that he is attacking Ukraine in defense of “the Russian-speakers in Ukraine, especially those in the two self-declared republics of Donetsk and Luhansk, which left Ukrainian control in 2014.” Russia invaded Ukraine from the north, east, and south and have also taken control of the Antonov Airport, which is about 15 miles from Kyiv, the capital of Ukraine.

Maks was staying in a hotel in Kyiv and provided daily updates on his situation in Ukraine, as well as sharing many other photos and videos. he briefly went to the hotel’s bomb shelter with other guests and even went into the city where he was arrested, and then released. To see what he said in each of his updates, click here.

His latest update, on Feb. 27, was that he was going to be attempting to flee the country. And on Feb 28th, his Instagram stories showed that he did just that.

He wrote, “I made it on the train. We’re headed to Warsaw [Poland] (hopefully). Train to Lviv [Ukraine] was not an option. The situations at the train station is insane. At first it feels manageable, but it gets A LOT worse when it comes time to actually board the train. I’m a big man with nothing but a backpack and it is TRAUMATIZING.”

Maks continued saying that he is in a cabin, which normally holds a maximum of three people, with four other adults and seven kids ages 2-11. The train car his cabin is in usually holds 30 people, but they were told 135 people must fit.

When he was boarding the train, he saw a father put his son on the train and it “broke” the pro dancer.

“What finally broke me is when I was watching an eight-ish year old boy, hysterically crying and not wanting to let go of his father.”

Maks said the boy told his father, “If you stay I want to stay too because if they kill you I won’t be able to help.”

After sharing a few videos taken throughout Ukraine, he told his fans that he was officially in Poland.

At the time of his posts, he said he’d been awake for over 31 hours and still had 1.5 hours left on the train. During his short time in Poland…and on the train, he said, “I absolutely have to say this: Polish people are amazing!!!!! Thank you from the absolute bottom of my heart and soul.”