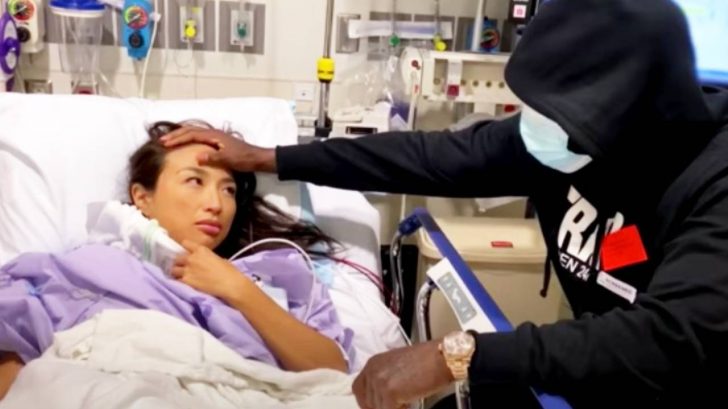 During Monday night’s (Nov. 2) episode of Dancing With The Stars, we found out just how life threatening contestant Jeannie Mai’s condition was after she had to pull out of the competition.

The show’s social media accounts made an announcement Monday morning, saying, “Jeannie Mai will not be able to continue to compete on #DWTS this season due to a health concern that requires immediate attention. Jeannie has inspired us, along with millions of fans, with her energy and dedication. We wish her a full and speedy recovery.”

It was revealed on Good Morning America that she was diagnosed with a condition called epiglottitis, which the Mayo Clinic says is “a potentially life threatening inflammatory condition that can cause swelling and block airflow to the lungs.”

The talk show host told Good Morning America, “My doctors discovered a health concern with my throat which requires immediate attention and surgery. I am heartbroken that my DWTS journey has to end here. I have pushed myself to new limits physically and mentally, and I am so proud of how far we’ve come.”

Of the condition, ABC News’ chief medical corespondent, Dr. Jen Ashton said, “It is a true, life-threatening medical emergency. The majority of [epiglottitis] is caused by a severe bacterial infection. Luckily, it is uncommon.”

She also said that epiglottitis can be diagnosed after someone experiences “the four D’s”: Difficulty swallowing, difficulty speaking, drooling and then distress.

During Monday’s episode, they show aired an update from Jeannie’s hospital bed. She did have surgery on Sunday night (Nov. 1) and it went extremely well. Before the surgery, she thanked everyone for supporting her through her dancing journey.

“I found out that I have a throat abscess, where my tonsils and my throat had gotten so infected that it started permeating to the rest of the areas behind my neck and my ears that I had to get emergency surgery, which is why I’m here now,” she said from her hospital bed.

The video package also saw her doctor telling her the surgery “went great” and that she was “out of danger,” but he also said, “If you had waited one more day, your throat would have closed up.”

Although she is “heartbroken” to have her DWTS journey end, her health comes first! Sending Jeannie prayers for a speedy recovery.

Watch her full update below.