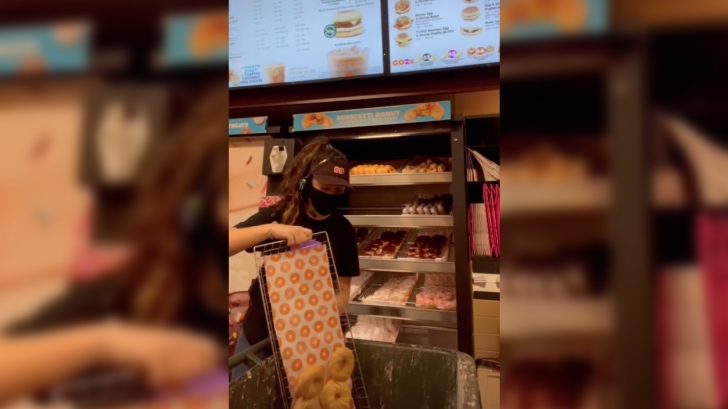 Dunkin’ Donuts employee and TikToker Kathleen Dias shared an enlightening video of how many donuts get thrown at the end of her work shift.

The young TikToker showed herself pulling dozens and dozens of donuts at a time off the shelves and throwing them all into a large garbage bin. Admittedly, she ate a few, but for the most part, most of them were thrown in the trash. It was shocking to see how many donuts actually get discarded.

Not all Dunkin’ Donuts throw their food away, however. Some of them are participating in a program called, “The End of Day Donation Program” which offers franchisees help with serving the community by donating their surplus food to hunger programs.

“It is left to the discretion of the individual owner of each restaurant whether or not food is donated at the end of the day,” Dunkin’ Donuts wrote on their website. “Here at Dunkin’, we encourage our franchisees to become involved with their local communities.”

According to Rubicon, an organization whose mission is to end waste, in all of its forms, food waste in America has been skyrocketing with the average American family of four wasting $1,500 in food per year.

“How much food is wasted in the U.S. can be seen directly through its monetary losses. The annual food waste in America has an approximate value of $161 billion,” Rubicon said.

The reports say that if we keep this up, in 10 years we’ll waste the equivalent of 66 tons of food per second across the globe. Learn more about food waste and what it is in the video below.