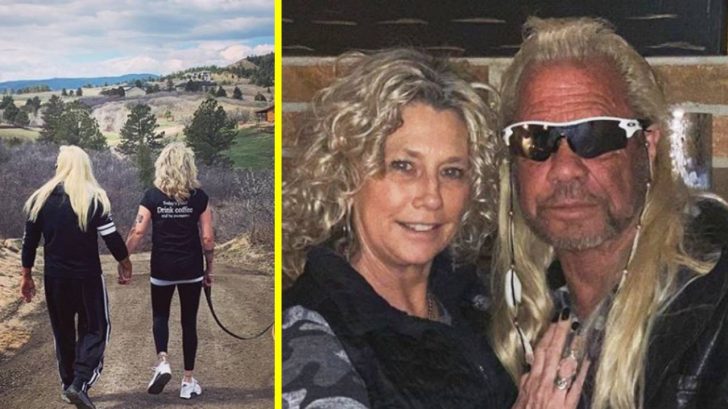 Duane “Dog” Chapman announced his engagement to Francie Frane on May 4, 2020, less than a year after he lost his wife Beth Chapman to cancer.

The couple announced their proposal through an exclusive interview with The Sun. Dog popped the question in a candlelit room at his home in Colorado and Francie said it was completely unexpected.

She said, “I came in and he said, ‘I know that God brought you into my life and I don’t want to spend one moment of it without you.’ And he got down on one knee and he opened the ring box and he said, ‘Will you marry me and spend the rest of our lives together?””

The announcement came as a surprise to fans, who had recently learned that Francie and Dog had only been dating a couple of months before going public in early April.

Their road to finding each other is quite interesting and just days after her engagement to the famous bounty hunter, she told The Sun just how they got together.

Beth Chapman’s death was highly publicized and when she passed last summer, Francie’s friend told her about it. Francie admitted she had never heard of Dog and Beth Chapman, but was moved by their story, seeing as she had lost her husband to cancer six months prior.

Her friend was shocked she had never heard of Dog The Bounty Hunter, and even pulled up a photo of him to see if it jogged Francie’s memory.

She took a look at the photo and told her friend, “I have no idea who that is – and that guy needs a haircut.”

The conversation ended there, but the next morning, Francie’s friend came to her and said, “Okay, you’re going to think this is nuts, but I have to tell you anyway, God just said to me that you’re going to meet Dog The Bounty Hunter and he’s going to use you guys in a huge way to change lives.”

Francie laughed it off. But a couple of months later, in August 2019, she listened to a voicemail left for her late husband Bob, who owned an excavating company in Colorado, where Dog has a home.

She had given her 8-year-old grandson the task of being in charge of Bob’s phone and had yet to answer any messages until she heard Dog leave a message for Bob. Dog actually said his name was Doug Chapman on the voicemail.

Francie felt the need to call him back because he clearly had no clue Bob had passed away, so she did.

She told The Sun, “So I called back and he answers the phone and I said to him, ‘I’m really sorry to tell you that my husband passed away a few months ago.’ So he starts balling [sic] and then I start crying. So then all of a sudden I hear him take this big, deep breath and he says, ‘My name’s not Doug, it’s Dog The Bounty Hunter.’“

Her jaw just about dropped to the floor, remembering what her girlfriend had told her just a couple months before.

Dog revealed he lost his wife, but of course Francie already knew that. They talked on the phone for over an hour and stayed in touch after that, meeting for coffee occasionally and being there for each other during the grieving process.

Eventually, their friendly feelings towards one another turned into something more, and now they’re getting married! The relationship might come as a surprise to fans, but it’s even more of a surprise to Francie.

She admitted, “I told everyone, my family, friends, everybody that I go to church with, I will never, ever be with anybody ever again.”

Dog has also echoed these sentiments, saying that he would never get married again. It must be love! The two were married in September 2021. We wish Francie and Dog the best!