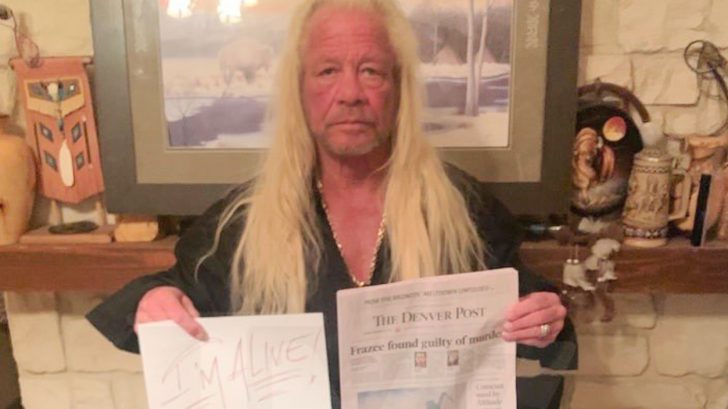 For the second time in as many months, Duane Chapman – who you may know as Dog The Bounty Hunter – had to take to social media to tell fans not to believe everything they read on the Internet.

In mid-November, a rumor started going around Facebook that Dog had passed away. Dog has been experiencing some major health issues since his wife Beth Chapman passed away this past summer, which made the rumor all the more believable.

Luckily, it was just that – a rumor.

He even sent a picture to TMZ to confirm he was alive and well. The photo showed Dog holding up a current newspaper as well as a simple sign that reads “I’m Alive!” Dog later shared the same photo on his official Instagram account. He thanked TMZ for spreading the news of his well-being in his caption to the picture.

It seems that the death hoaxes didn’t stop because Dog once again took to social media to tell his fans that he’s still alive!

“PLEASE STOP PAYING ATTENTION TO THE FAKE POSTS ABOUT MY DEATH. I LOVE YOU ALL!!” Chapman wrote on Twitter along with a photo of him holding up a sign that read, “I’m Alive!”

PLEASE STOP PAYING ATTENTION TO THE FAKE POSTS ABOUT MY DEATH. I LOVE YOU ALL!! #DOGPOUND!!! pic.twitter.com/1dA71SqOCA

He did use the same photo as the previous post, but he just wanted to get his message across! Luckily a lot of his fans responded positively and said they never believe the hoaxes they see online.

Check out the video below to hear him discuss his health and his feelings about death in another interview with Dr. Oz.