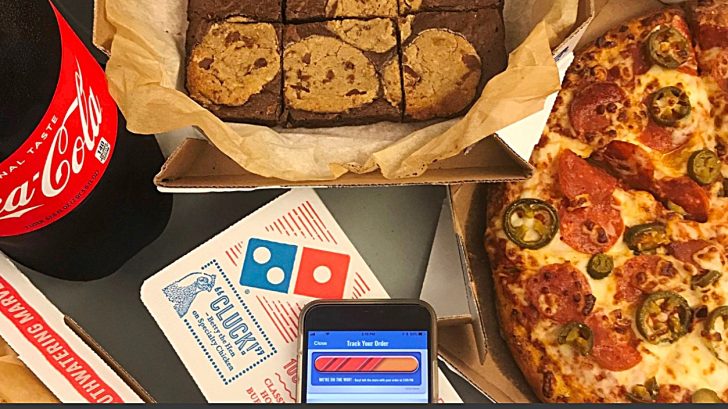 29-year-old Lee Rumney was out celebrating the birth of his six-week-old son, Freddie when his girlfriend Hannah Eddon texted him about getting some food. She told him she was ordering some pizza from Domino’s and he offered to make the order for her.

Posted by The Brian and Chris Show on Friday, February 3, 2017

Now, mind you, Lee had been drinking all day for 12 hours straight with his buddies and was super drunk. He began texting his girlfriend things that didn’t make sense but she could tell he wanted to make the order so she let him do it.

Lee arrived home before the delivery man got there and stumbled his way into the door. She said he was bouncing off the walls and running into all the doors on his way through the house. He then went upstairs and that’s when the doorbell rang for the pizza.

She went to the door to get the pizza and was shocked when she opened it to see the delivery man standing there with 19 boxes of food. Apparently, while drunk and ordering pizza on the phone app Lee mistakenly kept adding more chicken than he realized to his order because he thought it wasn’t registering.

Don't sideline the possibility to give yourself a yum treat. Try Domino's hot chicken wings today.

Lee spent $226 dollars on 15 boxes of chicken wings (that’s 189 wings), garlic bread, potato wedges, Dominio’s cookies and a medium pizza with all kinds of extras on it. She was totally embarrassed, however, the man smiled and helped her carry it all into the kitchen.

“When I went upstairs to tell Lee his food was here, he was just completely passed out on the bed and wasn’t waking up for anything. I was just stood there with all these boxes and the smell of chicken wafting through the house, I was fuming,” she told The Sun.

The next day, Lee woke up with a bad hangover, no memory of what happened and a $226 dollar bill for food that was now cold leftovers. His girlfriend made him eat the chicken for the next three days as punishment and banned him from ever ordering Domino’s pizza again. She says she’s glad she has a sense of humor because, in the end, this will be a funny story to look back on.

Drunk boyfriend, 29, accidentally orders 189 pieces of chicken with his pizza in £177 Domino's delivery after 12 hour…