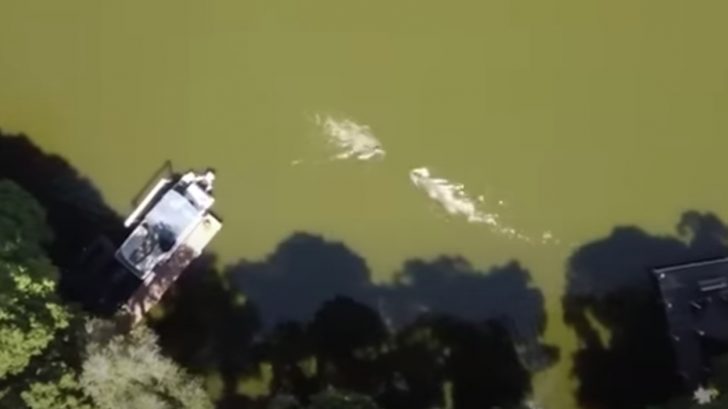 Triathlete Juan Carlos La Verde, who goes by the name JC Defeats was attacked by a 12-foot alligator while he was swimming in Florida and it was all caught on video by drone.

The shocking drone footage filmed on August 3rd showed the US Air Force Pararescue veteran swimming a few yards off of a dock on Lake Thonotosassa when the gator was spotted making a fast beeline towards the swimmer.

The attack only lasted a few seconds but the gator bit down on his head and upper torso with one big chomp and he put his hands in the gator’s mouth and felt its teeth.

Speaking to WFLA, the 34-year-old said: “I felt the equivalent of a telephone pole hit my face. And then because of my stroke I felt the scales and then I felt the teeth, so I knew what I was in.”

JC remained in the gator’s mouth for a few seconds while it crushed a part of his skull and broke his jaw. Eventually, the beast let go and JC immediately started swimming toward shore.

“It was just one large bite. I heard my jaw snap and then I just continued swimming,” he said.

Kenney Ceron of the Oldsmar Fire Department where JC now works as a firefighter and paramedic explained on JC’s GoFundMe page that he somehow made it to land where he was able to call the Hillsborough County Emergency Services to come help him.

Kenney told WFLA, “He was then rushed to Tampa General Hospital under Trauma Alert criteria where he underwent a 6-hour surgery to repair and reconstruct the damage to his skull and jaw.”

His wife Christine added, “He’s always thinking about others even though the unthinkable was happening to him.”

JC’s GoFundMe page has raised more than $57,000 out of its $80,000 goal which will go towards his medical bills and help support him and his family through his healing process.

The triathlete said he was out on the lake in the first place because he was filming a video for Defeat X, which is a business he created that focuses on helping others defeat their personal struggles through healthy exercise and outdoor adventure.

Video Interview With The Gator Attack Victim Below