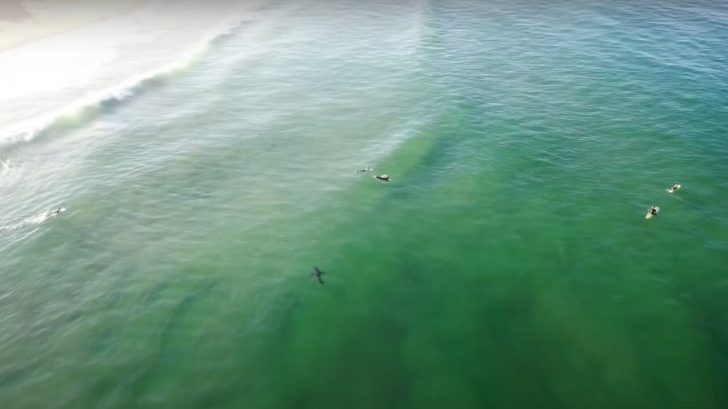 Surfing is a great sport for keeping your body healthy. It’s a great cardiovascular workout for the heart, and a very good upper and lower body workout with low-resistance when you are paddling through the water.

But one of the most important reasons people like surfing is because it’s fun. Practicing surfing with friends and other random surfers in the sunshine with a beautiful beach view is very enjoyable.

Yet, a group of surfers had a bit of a scare when they realized a shark was swimming right next to them. Drone footage showed the shark swimming in the direction of a few surfers, one of them to the shark’s left and four other surfers on its right.

As soon as the surfer on his left noticed the shark he swam back to the beach immediately and avoided him. Another surfer took off on the waves and luckily avoided a direct encounter with the shark without knowing it. There were three other surfers paddling not too far from the sea animal which eventually swam back out to the ocean.

Fortunately, no one was hurt during the encounter, neither the shark. The drone footage was shot in South Africa by a 14-year-old kid during the lockdown and you can watch that footage below.