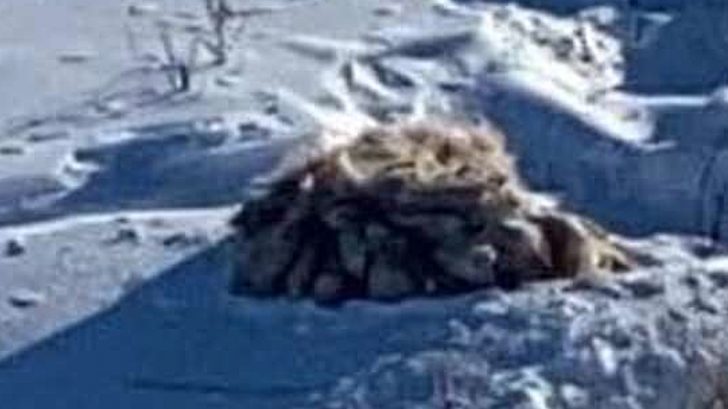 Two men were driving down the Trans Canada Highway in early February after a blizzard laid a heavy blanket of fresh white snow on the ground when they spotted a strange dark spot on top of the snow.

As they passed by the dark spot, they noticed it was actually moving. Upon further inspection, they realized that it was an animal that appeared to be stuck in the snow and was trying to free itself, but failing.

The men decided to pull over to get a better look at the animal and realized it was actually a domesticated dog. However, the snow was so deep and difficult to walk in so they decided to call Steinbach and Area Animal Rescue.

Michelle Neufeld and two other members who work for the rescue quickly drove out to the location and began making a path through the snow to get to the dog.

“We were in snow past our knees, so it was very difficult to reach her and extremely cold, but we managed. There was also quite a bit of bush and shrubs in the way as well,” Michelle, president of the rescue, told The Dodo. “When we got to her, we realized she was in a very rough shape and her whole body was full of mats. You could tell she’d been in the area for a while and she had tried to dig holes to make a bed.”

The dog was unfortunately too weak to walk on her own and the snow was too deep for them to carry her out, so they devised a plan to get her out of there.

They were able to pull the dog to safety and quickly drove her to the animal hospital. The team said she was immediately grateful to be in a warm car, and laid her head down on the seat to rest.

Once at the animal hospital, a veterinarian checkup was performed on her and showed that she was suffering from a fever and dehydration.

They gave her IV fluids to help reduce the dog’s temperature and she stayed overnight in the hospital to recover.

They named her Riley and once she got to feeling better, the veterinarians got to work on removing her heavy, matted fur coat. After getting her hair shaved down to a proper length, Riley finally started to smile and even play a little bit.

Riley was eventually brought to a foster home and her new family quickly fell in love with her. Since then, she has made a full recovery, however, the new owners said she still gets anxious around new people and when going outside.

Overall though, she’s learned to quickly adapt to her new life in a home and shows her new parents a lot of affection. There are even two new dog siblings and a cat she has already bonded with.

“She is very inquisitive,” Riley’s foster parent told The Dodo. “And she wants to be wherever we are all the time. [She’s] pretty happy, though, considering what she went through.”