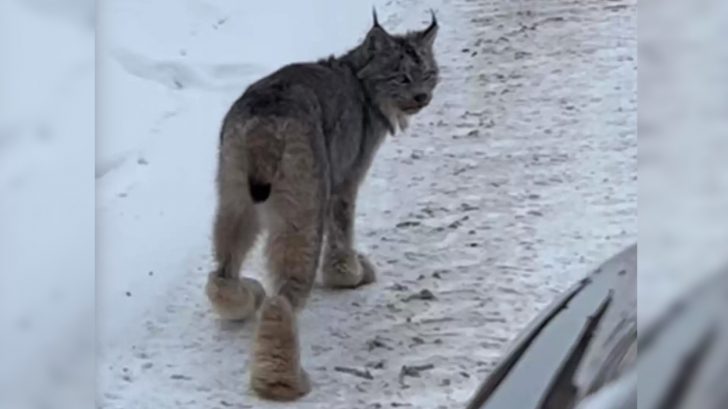 Emily Lamarche had an unexpected encounter while stopping at a fast food drive-thru in Canada. She found herself stuck behind a large lynx, who was evidently out for a stroll on a snowy winter day.

To Lamarche’s surprise, the lynx proceeded to go through the drive-thru lane without stopping, heading ultimately toward the safety and cover of his wooded habitat nearby.

Lynx are particularly elusive animals and are rarely seen by people even in the regions they inhabit. This made Lamarche’s encounter even more special and something she won’t soon forget.

She described the lynx as being calm and comfortable as it made its way through the drive-thru. The lynx even looked back at Lamarche a few times, making for an unforgettable moment.

“He went through the drive-thru!” Lamarche told The Dodo. “He looked back at me a few times, but was very calm. He was definitely comfortable!”

Lamarche’s encounter with the lynx serves as a reminder of the beauty and wonder that can be found in nature, even in unexpected places. It also highlights the importance of protecting and preserving these animals and their habitats so that future generations can continue to enjoy and appreciate them.

“He slowly made his way back to the bush. Not something you see so close to town, mostly on the highways or in the bush,” Lamarche said. “Such a beautiful animal!”

The fact that the lynx was so comfortable around humans and technology, is also a reminder of how much human activities are changing the animal’s behavior. It’s important to be aware of how our actions can impact wildlife and to take steps to minimize negative impacts.

Watch Footage of The Bobcat Below