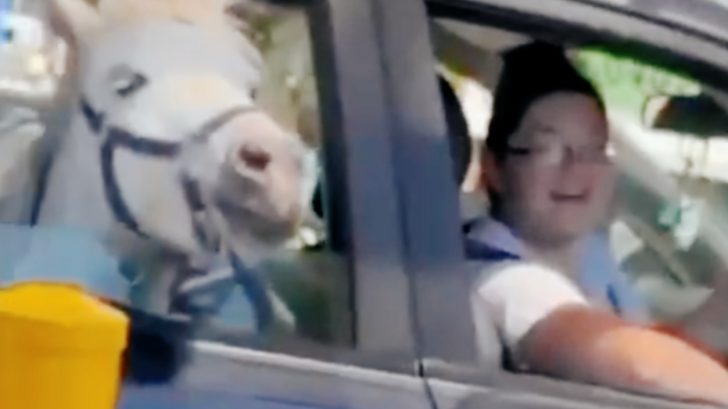 A tiny horse was recently spotted waiting patiently in the backseat of a car at a McDonald’s drive-thru in Tuggerah, a suburb of the Central Coast of New South Wales, Australia.

The incident occurred when Donna Bevan, a local resident, was at the drive-thru to buy a frozen Coke and noticed what she thought was a “huge white dog” in the backseat of the car next to hers.

However, upon taking a closer look, she realized it was actually a horse, which prompted her to film the unusual sight.

In the video, the driver of the car introduces the horse as Rocco and says that he is “excited for his ice cream.”

The video quickly went viral on social media, generating a lot of attention and amusement among the online community. Many praised the horse for its well-behaved nature and calm demeanor while waiting in the drive-thru.

However, it’s important to note that bringing animals into a drive-thru may not always be allowed by the establishment and could potentially be unsafe for the animal and other customers.

Furthermore, it can be difficult to know if the animal is comfortable in the environment and if it is being treated humanely. It is always best to err on the side of caution and to ensure that any animal that is brought into a public space is well cared for and treated respectfully.

In any case, this incident is a reminder of the beautiful bond between animals and humans, and how they can often surprise us with their unexpected behavior.

It is also a reminder that animals, no matter how big or small, can have a positive impact on our lives and bring a smile to our faces.

Watch Footage Of The Horse In Drive-Thru Below