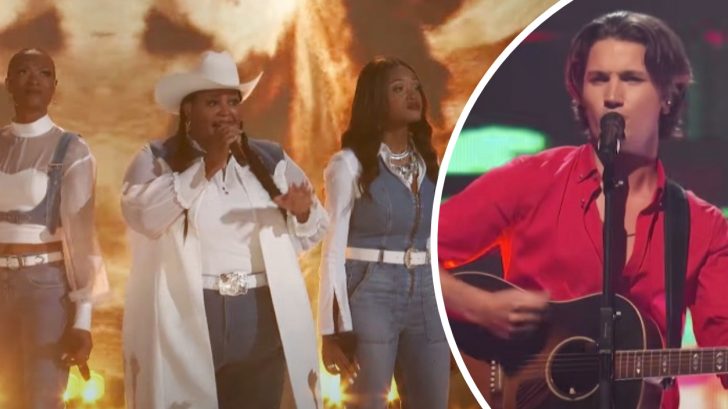 Country music fans had two acts to root for going into the America’s Got Talent finale this year…”The New Elvis of Country” Drake Milligan, and group golden buzzer trio Chapel Hart. Both of these fan-favorite acts competed in the finale with performances of original songs.

Milligan sang a tune of his called “Sounds Like Something I’d Do.” You’ll recall this is the same song Milligan performed for his AGT audition a few months ago. That audition has since been watched over 6.3 million times on YouTube.

His finale performance of the song was equally impressive, and had the crowd on its feet from the get-go.

Viewers at home also loved Milligan’s finale performance. Some of the comments on the performance’s official YouTube video were:

“There he is the next big thing for Country music!! He’s my number one vote!”

“This is outstanding!!! I am listening to his music it was perfection vote for him being the winner of AGT tomorrow.”

Like Milligan, Chapel Hart sang an original song during the finale. The song is titled “American Pride.”

Many viewers felt the performance was a bit shaky in comparison to the group’s past performances of “You Can Have Him Jolene” and “The Girls Are Back in Town.” This is something judges Howie Mandel and Simon Cowell commented on. But considering the pressure of performing in the AGT finale, it makes sense if the members of Chapel Hart were a little nervous that night.

Chapel Hart apologized to anyone who felt disappointed after hearing their performance, saying on Facebook:

“We want to first say we are so sorry if anyone feels let down by our performance…Tonight may not have been the BEST vocal performance, but we never been more PROUD of ourselves in our lives…WE LOVE YOU, to those who cried with us tonight thank you! And we are asking for you to vote… we pray y’all heard our hearts tonight and we will see you tomorrow night at the results show!”

You can watch Chapel Hart sing “American Pride” during the AGT finale below. We wish them and Milligan the best moving forward in the careers, whether they win or lose!

Who are you rooting for on AGT? Milligan, Chapel Hart, or one of the other acts?