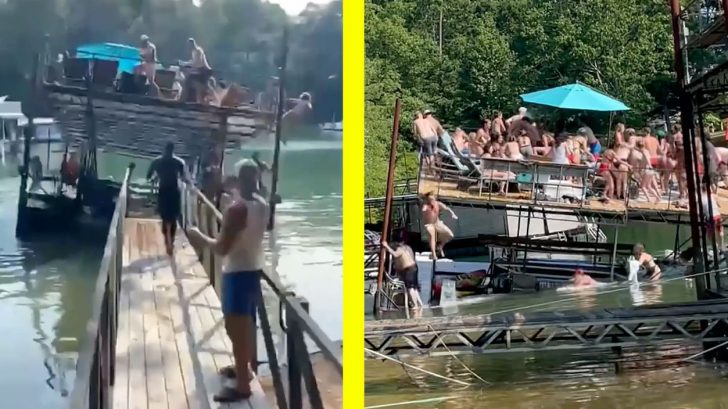 Over the 4th of July weekend, on Lake Lanier in Georgia, a massive party tipped over one of the famous lake’s docks, crashing it into the water – taking partygoers with it.

It’s hard to tell what exactly happened and what caused the accident but thankfully there were no injury reports.

One viral video shows the terrifying incident with some added humor. Narrated by a woman, the video opens with a shot of the dock beginning to sink. The woman then appears and says “it was cool at first,” with visuals of people partying. Then, the dock begins to collapse and people can be seen jumping into the lake while several others run back to the shore, as the whole thing slowly sinks. Thankfully the roof holds, but this doesn’t stop the massive structure from tipping until it begins throwing people into the water below. To add to the humor of the situation, Celine Dion’s “My Heart Will Go On” plays in the background of the video.

After watching dozens of people flee the sinking structure, it’s safe to assume that the dock had reached its maximum capacity.

Watch the video of the incident below.

Only at Lake Lanier ☠️?? pic.twitter.com/7XhdXn51YC