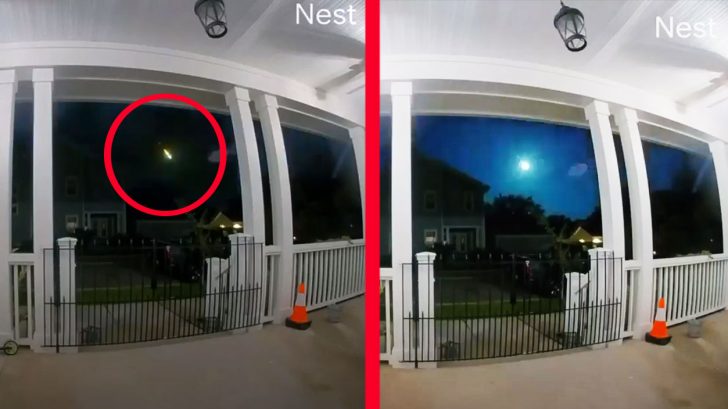 Only a few seconds long, the video shows a relatively dark neighborhood being instantly lit up with a bright flash, almost as if a giant camera took a picture in the sky. Immediately following the flash, a spherical object falls from the sky leaving a glowing trail behind it.

The meteors generally travel at about 148,000 mph, and the glow that we see is caused by fast moving bits of debris in the wake of the meteor.

The meteor seen on this occasion was part of the Eta Aquarids Meteor Shower, which is typically active each year during the months of April and May. This annual event is a result of the Earth passing through the path of Halley’s Comet.

Halley's Comet, arguably the most famous comet, is a short-period comet that is visible to the naked eye from Earth. It last appeared in the inner parts of the Solar System in 1986 and is projected to return again in 2061. Know more about it!

Halley’s Comet is arguably the most well known comet. It is a periodic comet that returns to Earth’s vicinity about every 75 years, making it possible for a human to see it twice in his or her lifetime. The last time it was here was in 1986, and it is projected to return in 2061. As it moves through space, it leaves behind a trail of debris that the Earth passes through as it orbits the Sun. As a result, we can predict when this debris enters Earth’s atmosphere as meteors.

Watch the doorbell footage below to see the meteor fall!