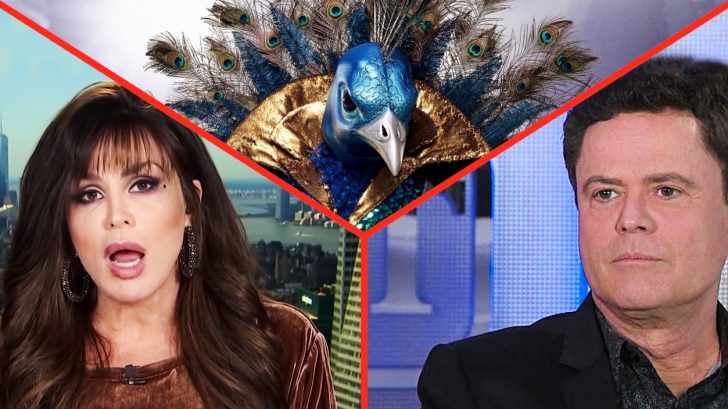 One half of this effervescent musical duo has opened up about being “so mad” after his sister spilled the beans to America about his role on TV’s hot new singing show: The Masked Singer.

Sitting down with Entertainment Tonight for a recap of the first season of the new show, Donny Osmond admits that he was “so mad” at his sister after she did an interview and let it slip that he was behind the mask of The Peacock.

The Masked Singer is a whole new take on singing competitions and it came over from Korea where it was one of the hottest shows on television – and now, Americans can’t get enough of it!

The premise is simple, a series of celebrities and famous names get all decked out in elaborate costumes and then belt out a song on stage while giving the audience and panelists a series of clues as each week goes on

Brush up on your detective skills! ? Use all the clues to guess who the celebrities are behind the masks TONIGHT at 9/8c on @foxtv. #TheMaskedSinger

Aired for one season already, most of the performers have been unmasked after getting the least number of votes for that evening – and the final three were unveiled during Wednesday’s finale (Feb. 27th, 2019).

As many suspected, the beloved 70s heartthrob and half of the Donny & Marie duo was behind the mask – but a lot more folks would have been in the dark had his sister not let it slip during a mid-season interview with Access Live.

The clue packages revealed that the Peacock first began performing at age five, was good friends with Michael Jackson, and even hinted at a Vegas show – while admitting “it’s probably been a while since your mom had a poster of me on her walls.”

Marie Osmond talked about both of her brothers’ recent surgeries (including Donny’s shoulder) and spoke candidly about her and Donny ending their Vegas residency.

The hosts commented on Donny’s assumed performance saying, “He’s great as the Peacock! Is he the Peacock?”

“We started [performing] the same year – he was five, I was three,” Marie said in response to the host’s question about his age-related clue.

“Was he friends with Michael Jackson? That’s one of the clues he gave away,” the hosts asked Marie.

“I know! I told him, I said ‘Why are you giving away such easy clues?’,” Marie responded without a beat before the hosts started cheering.

A brief pause and a few seconds later, Marie started backtracking and saying she “doesn’t know” if he’s The Peacock.

Well, soon enough and the whole world had seen the interview – including Donny. True to his word, he says he was mad at her for spilling the beans because the whole premise of the show is based on each singer’s secret identity – and he had quite a few more weeks left!

Sitting down with Entertainment Tonight‘s Kevin Frazier, Donny admitted he’s still a bit sore over the near-miss of ruining the surprise.

“Don’t even bring Marie’s name up!” Donny snapped with a little chuckle in his voice. “I was so mad. [That’s] the last time I’m going to trust Marie with a secret. To her defense, she was trying to be funny… [but] I called her up: ‘How could you do this to me?'”

Frazier then asked what costume he thinks she’d take if she were to join the show – “MONSTER!” he shouted with a laugh. “Typecasting!”

Even though the little slip of the tongue might have ticked off Donny, obviously they don’t let it get the better of them and they’re still enjoying working together on their Las Vegas show – but, Donny says, they still need to sit down and decide if they’re retiring.

Watch Donny Osmond talk about the situation on The Talk below and let us know if Marie’s tip-off was how you learned Donny was The Peacock.