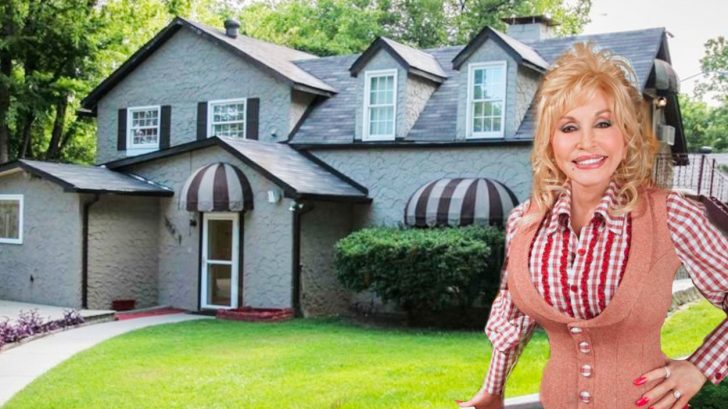 Want to live like a Queen? Well, now you can! The Queen of Country, that is.

The house that Dolly Parton shared with her husband Carl Dean for 16 years is on the market again, but this time there’s a twist.

Dolly met her husband at a laundromat shortly after she moved to Nashville, Tennessee. The two were married on May 30, 1966 in Ringgold, Georgia. Just one year later, she was asked to join Porter Wagoner as a regular on his weekly show, as well as his road show.

After many years of working with Porter, Dolly ventured out on her own and became a country legend. By 1976, she had already released her iconic songs  “Coat Of Many Colors,” “I Will Always Love You, ” and “Jolene,” as well as many other hits.

In 1980, she starred in her feature film debut, 9 to 5, which solidified her as even more of a star. That was also the year she and Carl moved into a 4,795 square-foot house in Nashville, Tennessee that they would call home for the next decade-and-a-half.

The house, which was built in 1941, sits on 2.4 acres and has five bedrooms and two bathrooms. Dolly and Carl sold the property in 1996, and the current owners made some changes. They added an additional 1,500 square foot guest house, and remodeled it to have an open floor plan, which is what the twist is. The next owner is now able hold wedding receptions, family reunions, additional living quarters, or even a museum!

According to Patch, the beautiful home has been a successful short-term rental for folks visiting Music City, so new owners could continue renting it out on sites like Airbnb, or live in it themselves!

The home is located at 3146 Glencliff Road in Nashville, and is far enough away from the hustle and bustle to feel like you’re in a small town. Downtown Nashville and the Grand Ole Opry are just 20 minutes down the road.

Would you want to live where Dolly once lived? We sure would! And now you can. Rockology, LLC is handling the sale for an unknown price.

Take a virtual tour of Parton’s former estate in the video below.