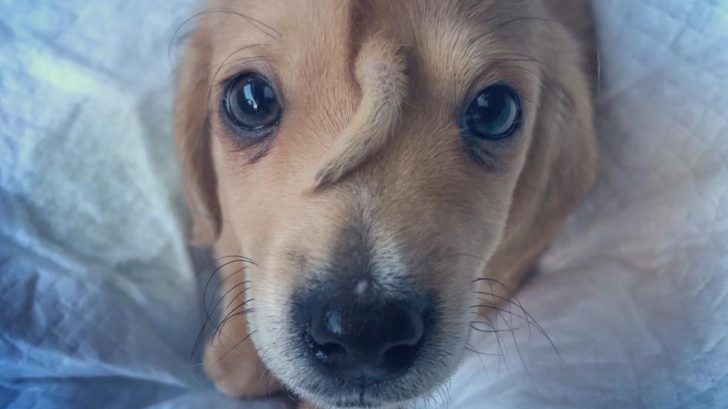 Narwhal, a 10-week-old puppy with a tail growing between his eyes has finally been adopted by Rochelle Steffen, the founder of Mac’s Mission, which is a nonprofit dog rescue organization that focuses on helping dogs with special needs.

Narwhal, the 10-week-old furball who has a small tail-like growth on his forehead, was adopted! https://t.co/3oa12WL7hM

This little unicorn pup was found by the rescue team in Jackson, Missouri at a trash dumping site in the freezing cold. He was taken back to the rescue center in which they ran medical scans on him and to everyone’s delight, the puppy was perfectly healthy.

“He had x-rays and a vet visit … and is a perfectly healthy puppy, with an extra tail on his face,” Rochelle said, according to Good Morning America. “There is no medical need to remove it currently and it is a third the size of his actual tail.”

Once Mac’s Mission posted pictures of Narwhal to their Instagram the little guy went absolutely viral. Getting over 47 thousand “likes” to his picture on a page that normally gets around 2 thousand “likes” on images.

The million dollar question about Narwhals extra tail on his face. Is it connected and does it wag? The extra tail is not connected to anything and has no real use other than making him the COOLEST PUPPY EVER! One of our followers said, “It appears they assembled the puppy wrong. Always follow the directions people!” This is a true experience of having “extra parts” during assembly. Dr. Heuring said there is no real reason at this time for the unicorn tail to be removed (and we all wish it wagged)!! Pretty sure the staff at Cape Small also gushed all over this little nugget! The unicorn face tail does not bother Narwhal and he never slows down just like any normal puppy. He seems completely healthy other than some usual puppy worms he got meds for. He is not available for adoption immediately as we want him to grow a bit more and truly make sure the tail doesn’t become a bother or problem. Right now he is pretty much the most unique amazing example of what we do here and we are so thankful to have the chance to be part of his journey. Thank you everyone for helping us help them! Love, MacBigFosterBro #macsmission #iampitbullstrong #narwhal #narwhalthemagicalunicornpuppy #reallifeunicorn #unicorn #adopt #foster #rescue #specializeinspecial

Why She Decided To Adopt Narwhal

Before Rochelle decided to adopt Narwhal herself, he was put up for adoption and got hundreds of allocations to take him. Scared that he would be exploited and used to make money unethically due to his rare extra tail, the organization owner decided to keep him.

“If somebody is going to make money off of him, I would love to see it go toward the rescue, and save thousands more dogs,” Rochelle told the Southeast Missourian.

Everyone at the rescue center was falling in love with him anyway and with all the attention he was bringing to all the other unfortunate dogs it made sense to keep him. Congratulations on your new home Narwhal!