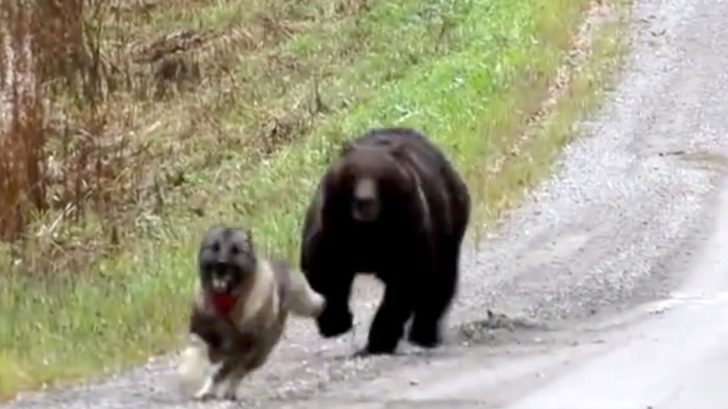 How enjoyable it is to drive through the forest, make a short stop, get out, stretch your legs, and breathe the crisp clean air? That’s exactly what a group of men were doing before their dog came running out of the forest with an unexpected bear friend.

A video shared on Facebook by Full Things in 2017 shows men having a discussion next to their vehicles and waiting for their dog to come back out of the woods. As they were waiting, they saw a small bear come running out of the woods and onto the road with their dog right behind it barking.

After the bear heard the dog barking, it turned around and started running straight towards the dog and in the direction that the men were standing. One of them took a video of the bear while another man threw up his hands in an attempt to scare the bear off.

The bear continued to run towards them and in a short panic, the men began to retreat back to the safety of the vehicles. However, that didn’t last long. The bear quickly took a turn into the woods and the men felt safe about watching from outside their vehicles.

Fortunately, no one was hurt and they all got to experience a once in a lifetime encounter with a wild bear. Watch the video footage below that shows both the dog and bear enjoying their time together.