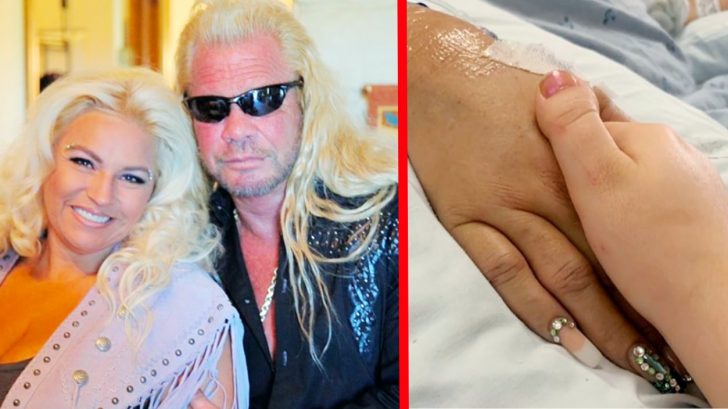 There, the pair starred in a new, spin-off series called Dog and Beth: On the Hunt. The show ran for a total of three seasons.

Since the show’s end, the couple has faced their fair share of challenges. Beth was diagnosed with throat cancer a few years back, and underwent surgery in 2017 to remove it. The cancer returned the following year, and doctors performed yet another surgery in November 2018 to remove a tumor in her throat.

Then, on June 23, Dog took to Twitter to ask his fans to please pray for Beth.

It was later revealed by Hawaii News Now that Beth was admitted to an ICU at a Hawaiian hospital and was placed in a medically-induced coma. Her family confirmed this news through a statement made to the outlet.

Dog shared a photo from Beth’s beside the day after he asked fans for prayers. The simple photo shows Beth’s hand and well-manicured nails, prompting Dog to remark, “You all know how she is about HER NAILS !!”

That photo originally served as the only confirmed “update” on Beth since she was placed in the coma. Dog later took to Twitter to clarify that many of the reports that have since emerged about his wife’s condition are false.

90% of what you’re hearing is fake news. I don’t mean to be nasty but some are filling in the blanks. @wgnamerica will be releasing an accurate update soon. Please keep prayers coming!

Then Dog and Beth’s daughter, 20-year-old Bonnie Chapman, shared a new photo from her mother’s beside in the hospital.

Like her father, Bonnie didn’t exactly provide an update on her mother’s condition. She simply shared a photo of her holding her mom’s hand in the hospital, along with some old photos from the past.

“So thankful to call you my mother,” Bonnie wrote.

So thankful to call you my mother.

Sadly, at 5:32 Hawaii time on Wednesday (June 26), Beth passed away. Dog announced the sad news on Twitter, writing, “It’s 5:32 in Hawaii, this is the time she would wake up to go hike Koko Head mountain. Only today, she hiked the stairway to heaven.”

It’s 5:32 in Hawaii, this is the time she would wake up to go hike Koko Head mountain. Only today, she hiked the stairway to heaven. We all love you, Beth. See you on the other side.

Bonnie recognized her mom’s passing in an edited caption to the photo she previously shared, writing, “Rest In Peace, mom. I love you so much.”

Our hearts break for Bonnie, Dog, and all of Beth’s loved ones. We’ll be keeping them in our prayers.