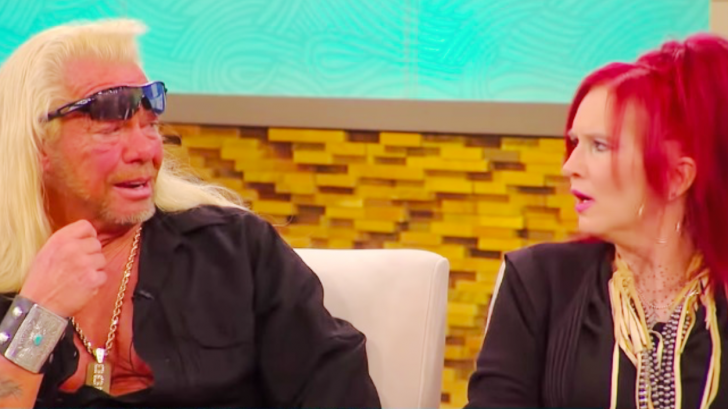 In late January, a teaser clip from The Dr. Oz Show sent fans of Duane “Dog” Chapman into a frenzy. The clip showed Dog and his rumored girlfriend, Moon Angell, on Dr. Oz when Dog suddenly turned to Moon and asked her to marry him.

Moon was visibly shocked, as was Dr. Oz.

Fans had to wait until the full episode aired on February 3 to understand the context of the proposal and get Moon’s answer. It turns out the proposal wasn’t genuine, and rather, was Dog’s way of trying to prove that he and Moon are nothing more than friends.

After Dog asked her to marry him, Moon quickly rejected him, saying, “What? No. We’re friends, Duane. I love you as a friend.”

Moon did admit that she had moved into Dog’s house to provide him with some companionship following the death of his wife, Beth Chapman, in June. She even confirmed she had cleaned out Beth’s closet and replaced her clothes with her own, but only upon Dog’s request.

When explaining why she was living with Dog, Moon said “my friend’s in need…and he needed help.”

Anyone who follows Dog on social media can tell he’s still mourning Beth, and misses her terribly. Just days before Valentine’s Day, Dog shared a slideshow of him and Beth, writing in the caption, “A lot of valentines days memories that will last forever.”

In an exclusive interview with ET, Dog made it clear how much Beth’s death still pains him to think about:

“Oh, I miss her,” he said. “Eight months, that’s the worst part, it seems like yesterday and they say ‘time heals all wounds.’ No, it doesn’t.“

Dog then went on to explain the reason why he relied on Moon so much after Beth’s death, saying it was because she had been close to her:

“I am very lonesome,” Dog said. He went on to add that he turned to Moon because “she knew Beth. And she talked about Beth constantly, ‘Remember what Beth used to tell us,’ and of course I would light right up when she’d say that. I was infatuated with a dream.”

But Dog claims there was never anything romantic between him and Moon. He also says his Dr. Oz proposal was unrehearsed, though it was something he thought about in advance:

Explaining why he proposed to Moon, Dog said, “I swear on my mama and on Beth that [the proposal] was not rehearsed. And you saw Dr. Oz was even like, ‘Oh my god.’ I knew I was gonna do it way before I done it, and I said, ‘This will stop these [romance] rumors.”

Dog felt pretty confident Moon would say “no,” but was scared she would answer “yes.” If she had, Dog admits he likely would have pursued a relationship with her:

“Yes, I am going to be honest with you, brother. Yeah, I think I would have [been with Moon] because it was more accessible,” he said.

But now, Dog and Moon remain nothing more than friends, and she continues to work for him and his family. Though Dog says she was definitely shaken up over the Dr. Oz proposal. “I kind of embarrassed her a little bit and I shouldn’t have,” he said.

You can watch the moment Dog proposed to Moon on The Dr. Oz Show and hear her response in the video below.