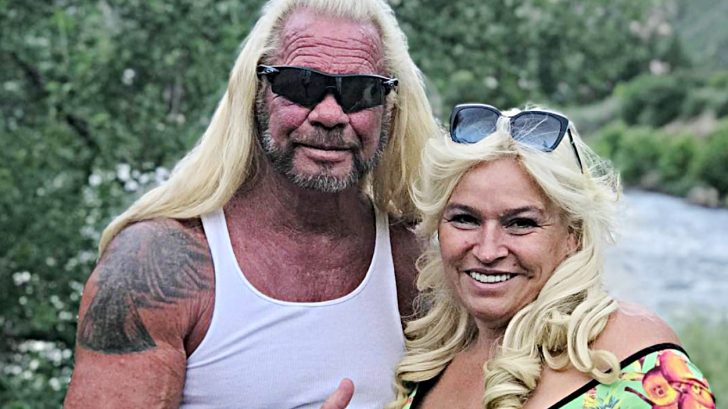 June 26, 2020, marked the one-year anniversary since Beth Chapman tragically passed away from complications of lung cancer.

To honor Beth on the anniversary of her death, Dog gathered with close family and friends for a private memorial ceremony.

She said Big Daddy your going to be so sad when I am not here on our next anniversary why did she have to be so right ??

The spot he picked for the memorial was a favorite for them both, the South Platte River in Deckers, Colorado. According to Dog, he and Beth used to frequent the river every Father’s Day in the past. She would float in her raft, while Dog would fish.

Sent to me this morning from @DogBountyHunter @MrsdogC THIS is how you shall be remembered. Thank you for the joy, the heartache and everything in between. You are loved ❤️#ForTheLoveOfBeth#ThisOnesForBeth#SeeYouOnTheOtherSide #TheDirtyDozen pic.twitter.com/0WJ6yPQXmR

The Sun was granted special access to be a part of the memorable day and shared multiple photos on its website of the event.

The neon green raft Beth would float in during their annual Father’s Day trips was filled with her favorite flowers, cowboy hat, and a large photo of her. The raft was later set free to drift down the river into the unknown as a tribute to Beth.

Dog had support from his fiancée, Francie Frane, and daughter, Bonnie, while they celebrated Beth’s life. It was a day of mixed emotions and Dog admitted he still couldn’t believe that Beth was “never coming home” and that it had been a whole year since her passing.

Dog also paid tribute to his fiancée Francie, saying he would not have been able to cope without her.

On the same day, Beth and Dog’s daughter Cecily held a sunrise hike and a paddle out in Hawaii in memory of her mom.

“I love you and miss you like crazy,” Beth’s daughter, Cecily, wrote in one of her tribute posts to her mother.

It is clear to see that Beth is so dearly missed from the outpouring of love on the first anniversary of her death.

May she rest in peace.