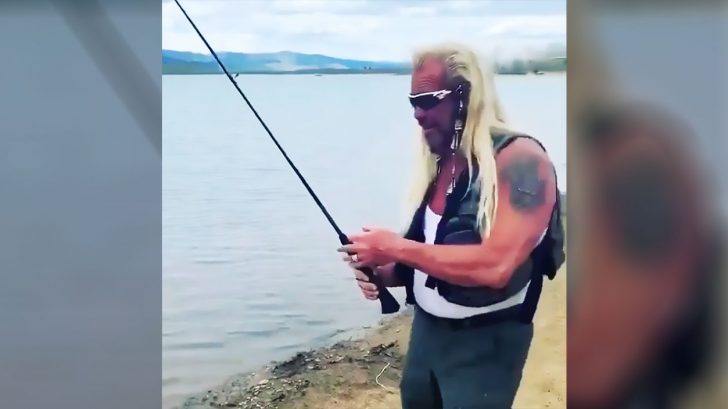 Duane “Dog” Chapman announced his relationship with Francie Frane on April 15, 2020, and told fans via Instagram that he was excited about the new chapter.

Dog and Francie both lost their spouses to cancer around the same time in 2019. Francie’s late husband Bob used to do yard work for the Chapmans. Without knowledge of each other’s situation, Dog called the Frane residence one day in an attempt to reach Bob only to talk to Francie herself. Over time, they began to form a bond through grief and recovery together which lead to a serious relationship.

On April 18, 2020, a video was posted on Dog’s Instagram where the two of them are making jabs at each other while fishing. In the video, Dog jokes with Francie and tells her that he’s going to catch a bigger fish than her. He then casually walks over to the net holding the fish she caught and tells her it floated away. The video is comical and shows how accustomed they’ve become to each other in the past couple of months.

Fishing isn’t the only activity the couple has been bonding over. Francie posted a picture of Dog learning how to drive a tractor with the caption, “Let’s see if we can show this bounty hunting tough guy how to run some equipment, like us country folks do!!”

Let’s see if we can show this bounty hunting tough guy how to run some equipment, like us country folks do !!

In an interview with the Sun, Dog spoke openly about how he felt things were going.

On May 4, 2020, they announced on Instagram that they were engaged!

Learn more about the couple’s relationship and how Dog’s kids are supporting it by watching the video below.