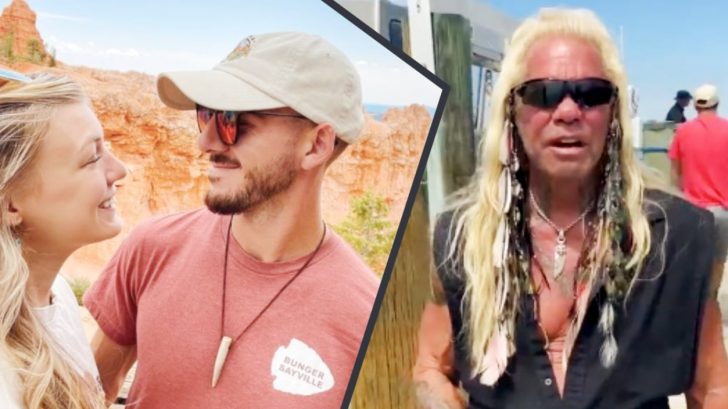 Dog the Bounty Hunter has joined the manhunt for Brian Laundrie, who is a person of interest in relation to the death of his fiancée, Gabby Petito.

Gabby’s body was found on September 19 in the Bridger–Teton National Forest in Wyoming. Teton County Coroner Dr. Brent Blue determined her manner of death was homicide.

Brian and Gabby had been traveling together in a van on a journey to explore some of America’s National Parks. But Brian returned home in the van, without Gabby, on September 1. Then on September 14, Brian’s parents claim he left to go for a hike…but he never returned. His whereabouts have been unknown ever since.

The search for Brian was officially declared a manhunt “after a grand jury indicted him for alleged unauthorized use of a Capital One debit card and several accounts,” USA Today reports. The documents did not state if the debit card and accounts belonged to Gabby.

Dog, whose real name is Duane Chapman, joined the manhunt after previously commenting on the case. He lost his own daughter, Barbara, in a car accident when she was around the same age as Gabby, so he has taken this personally.

After receiving numerous tips, Dog arrived at the Fort De Soto Park, which is about 75 miles from the Laundrie home:

“He told Fox News he received a tip on Monday that Laundrie’s parents spent the night in Fort De Soto Park with their son twice in early September from Sept. 1-3 and Sept. 6-8,” read a Monday (September 27) report from Fox News. “They were registered, went through the gate. They’re on camera. They were here,” Dog said.

On Wednesday (September 29), Dog zeroed in on the location where he believes Brian may be hiding.

“... we launched an active and specific search in a key area based on the intelligence we are receiving and researching. Boat crews and ground teams have been called in and we have search and rescue dogs deployed,” Dog said.

UPDATE: Video is from this morning — earlier today we launched an active and specific search in a key area based on the intelligence we are receiving and researching. Boat crews and ground teams have been called in and we have search and rescue dogs deployed. More to follow… pic.twitter.com/g2tq85JTZX

Later in the day, Dog’s daughter, Lyssa, spoke with reporter Brian Entin to say that her dad and his team “have found personal items believed to be Laundrie’s.”

Entin also said Dog and his team discovered “what could be a campsite” during their search.

Just talked to Dog's daughter Lyssa.
"We are pretty sure that he is stashed out on those islands and mostly active after the parks are closed and everyone goes home." She says they have found personal items believed to be Laundrie's.
Her interview and more on @NewsNationNow at 9

Our full report on the manhunt for Brian Laundrie.
Police back at the reserve with boats.
Dog the Bounty Hunter discovering what could be a campsite and personal items at Fort De Soto.
And we look into the phone the family purchased before Brian disappeared. pic.twitter.com/RChBtzQ8hY

Fox News also reported on what Dog discovered during his search:

“Duane “Dog” Chapman discovered a campsite and fresh Monster can deep in the woods while searching Shell Island off the coast of Florida for Brian Laundrie Wednesday. The Monster can showed no rust or faded colors, according to a Fox News Digital reporter on the scene with Chapman.”

Despite these discoveries, Fox News reports, “Chapman and his team found no conclusive evidence that Laundrie was still on Egmont Key.“

FRESH BITE
SEE IT: What Dog the Bounty Hunter just found in hunt for Brian Laundrie as K-9 team island-hops in pursuithttps://t.co/keVNUzVqSK pic.twitter.com/Gm4zbqkOXB

Dog and his team continued searching into the evening, but eventually called things off for the night. The reality TV star later took to social media to address his followers.

“…thank you to everyone across the nation who is assisting…in the search,” his post read.

As of this writing, Dog has not yet revealed when and where his search will resume on Thursday (September 30).

Dog sends a thank you to everyone across the nation who is assisting them in the search.

“This has been a very different search,” said Dog. “America is along for the journey with us and I’m ready to do more!”